Burning billboard is all smoke and no fire 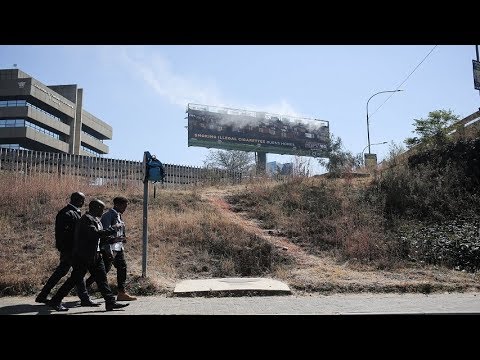 Motorists driving along Empire road in Johannesburg might be forgiven for yanking their steering wheels or hitting the brakes if they see a burning billboard this week.

But the City of Johannesburg's emergency services has assured drivers there is nothing to worry about.

The burning billboard‚ which is situated near the off-ramp to Barry Hertzog road‚ is part of a campaign by British American Tobacco South Africa (BATSA) to raise awareness about the illicit trade of cigarettes.

To keep the smoke and fire burning over the next four days while the campaign is running‚ the organisers are making use of an entire special effects crew.

Manuel Lopes‚ head of productions at Joe Public‚ said the campaign was making use of a crew of up to seven people‚ including a choreographer monitoring the wind direction and strength to ensure safety.

"It obviously isn't real flames. It is just special effects and we've got a health and safety person on site‚" he said.

Lopes said the intensity of the smoke and fire will change over the course of the week‚ with up to a quarter of a ton of liquid gas being used to keep the effects going.

Mfundo Shabalala‚ who works at Hollard in the office park adjacent to the burning billboard‚ said he arrived at work on Monday morning and saw people standing around.

"I saw the smoke and fire and thought maybe the billboard was on fire. But then I saw people with the gas cans‚ so I thought it might be controlled‚" he said. Shabalala said he wasn't worried about fire because it didn't look like it did any damage to the billboard.

Oupa Mabota‚ a driver who dropped someone off in the vicinity of the billboard on Monday morning‚ said he was left a little confused.

"When I saw it‚ I was with my boss… I slowed down [on the offramp to Barry Hertzog] and my boss took a picture. When I came back later‚ it was still burning‚ but it didn't do anything to the billboard‚" he said.

Mabota said he was confused‚ but didn't worry because people seemed relaxed in the area.

Bongumusa Makhathini‚ director of legal and external affairs for British American Tobacco South Africa‚ said in a statement that the campaign was done to raise awareness over the nearly R6-billion lost in tax revenues yearly.

Makhathini said BATSA wanted to raise awareness about the negative economic impact of the illegal trade of cigarettes.

Robert Mulaudzi‚ spokesperson for the City of Johannesburg's emergency services‚ said the organisers of the campaign had obtained the necessary permission from the city‚ and emergency services would be monitoring the process throughout the week.