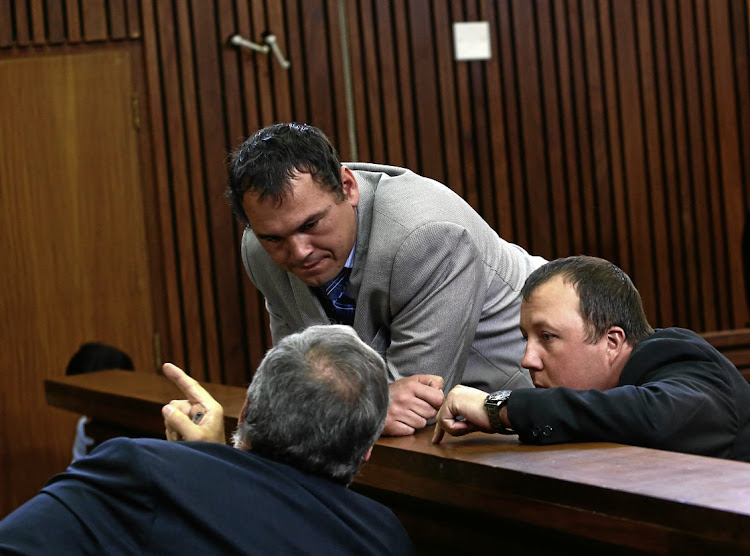 Willem Oosthuizen and Theo Jackson talk to their lawyer in the Middelburg Magistrate's Court, where they are being tried for assault and forcing Victor Mlotshwa into a coffin.
Image: Masi Losi

The defence in the #CoffinAssault trial tore into the evidence of the two men who were allegedly assaulted by their clients.

Advocate Wayne Gibbs who represents the first accused‚ Willem Oosthuizen‚ said it was clear from the evidence before court that the alleged victims - Delton Sithole and Victor Mlotshwa - had discussed the case before‚ despite Mlotshwa denying it.

Sithole told the court that he and Mlotshwa had discussed the case.

“There are irreconcilable differences [in their evidence]. What makes it more interesting is that they corroborate each other on the date [on which the incident happened] August 17‚” Gibbs said.

The prosecution in the #coffinassault case has told the court that if the victim‚ Victor Mlotshwa‚ had been killed on the day he was forced into a ...
News
4 years ago

He said their evidence was fabricated.

“When people fabricate a story‚ they do not do it in detail... They said to each other‚ ‘Let us agree that it was on the 17th of August‚” Gibbs submitted.

He said according to the car tracking records before court‚ Oosthuizen and his co-accused‚ Theo Martins Jackson‚ are placed at the scene on September 7. Oosthuizen and Jackson are facing charges of attempted murder‚ two counts of assault with intent to cause grievous bodily harm‚ kidnapping‚ intimidation‚ unlawful possession of a firearm and defeating the ends of justice.

The defence in the #coffinassault trial on Monday accused the police and witnesses of colluding on the date on which the incident occurred‚ implying ...
News
4 years ago

Oosthuizen and Jackson are also accused of concealing evidence by allegedly burning the coffin either in October or November.

They have pleaded not guilty to all the charges but admitted to placing Mlotshwa in a coffin and said it was to “scare him”.

Earlier in the day prosecutor Advocate Robert Molokoane submitted that the footage did not prove that Mlotshwa was not assaulted.