Grace Mugabe flees home as SA lets her off the hook 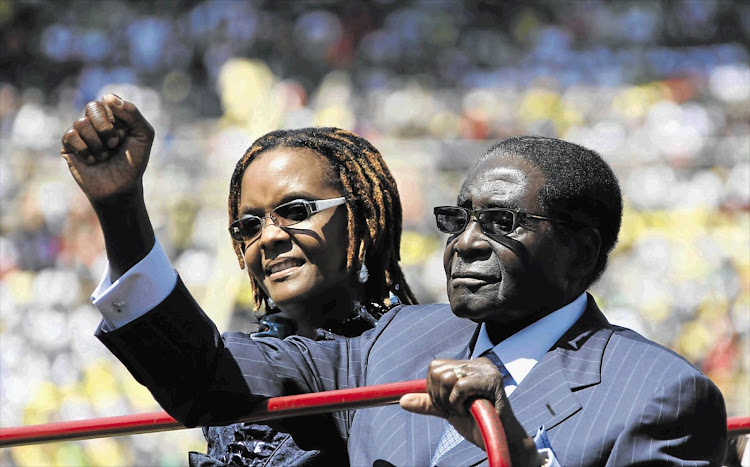 Grace Mugabe's return home after being granted diplomatic immunity felt like a slap in the face for the family of Gabriella Engels, who was allegedly beaten by Zimbabwe's plug-wielding first lady.

President Robert Mugabe and his wife flew out of South Africa in the early hours of Sunday morning after a week of public outrage and diplomatic wrangling - untouched by the authorities after Engels, 20, laid a charge of assault with intent to do grievous bodily harm against her after an altercation at a hotel in Sandton, Johannesburg.

"I'm not surprised at all. I knew the government was going to disappoint me," Engels told The Times. "I'm upset. But this is definitely not the end of my case," she said on Sunday.

Minister of International Relations and Co-operation Maite Nkoana-Mashabane confirmed on Sunday that Grace Mugabe had been granted diplomatic immunity.

Engels's mother Debbie said the family was not happy about developments. "I was bracing myself for this news and I was half expecting it. But it doesn't hurt less," she said. "It is like a slap in the face after all the injuries."

She said the family would get past the traumatic incident and hoped that justice would eventually prevail.

"To think that our government chose to protect their relationship with another country instead of one of their citizens, it is ridiculous," she said. The Engels family is hoping Mugabe will still face the music for her hotel outburst. And though she may have left the country, she is not yet off the hook.

South African Airways flights to and from Johannesburg’s OR Tambo airport and Zimbabwe resumed on Sunday‚ after flights between the countries were ...
News
4 years ago

Civil rights organisation AfriForum is helping Engels with a legal application to set aside the diplomatic immunity order.

"It was an irrational decision and we hope to argue the facts in court to prove this," said Willie Spies, AfriForum's legal representative. He said AfriForum would prepare papers this week so the matter could be heard soon in the High Court.

Following the allegations last week that Grace had burst into a hotel room carrying an electricity cable with a plug on the end and assaulted Engels and two of her friends, she had failed to hand herself over on Tuesday after negotiations between her legal team and the police.

Police spokesman Brigadier Vishnu Naidoo said‚ “On completion of the investigation the docket will be forwarded to the SPP for a decision”. On Sunday morning the Department of International Relations and Co-operations confirmed Nkoana-Mashabane had granted diplomatic immunity.

Mugabe victim tells how she was dragged by her hair, whipped
News
4 years ago

"In accordance with the powers vested in me.I hereby recognise the immunities and privileges of the First Lady of the Republic of Zimbabwe, Dr Grace Mugabe, in terms of international law and as set out in the attached notice," read a notice published in the Government Gazette on Sunday.

The department said it granted Mugabe immunity after considering numerous factors, including the need to uphold the rule of law, ensure fair administration of justice and uphold the rights of the complainant.

The department said Nkoana-Mashabane "agonised" over the decision. It said it considered relations within the Southern African Development Community region, particularly its relationship with Zimbabwe.