Only half of those with Matric are employed 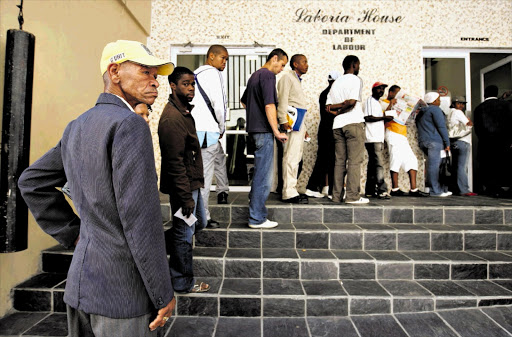 A queue for Unemployment Insurance Fund payments at the Department of Labour in Port Elizabeth. File photo.
Image: JAMES OATWAY

Only 4 in 10 people of working age have a job in South Africa - and if you are under-qualified‚ your chances of earning a salary are not good.

A dramatic increase in the number of unemployed people is quantified in the 2017 South Africa Survey‚ published by the Institute Of Race Relations on Monday‚ based on Stats SA data.

IRR employment analyst‚ Gabriela Mackay‚ said: “Just 43.3% of South Africans of working age are employed. The figure is lowest for black South Africans‚ who demonstrate a labour market absorption rate of just 40.4%. These figures are low‚ especially when compared to many similar economies." The labour market absorption rate measures the proportion of people of working age who are employed.

The IRR found that South Africa’s absorption rate depends largely on a person’s level of education.

The unemployment rate remained unchanged at 27.7% in the June quarter from the March quarter, dashing hopes of a slight improvement.
Business Times
5 years ago

- The number of unemployed people (according to the expanded definition) has increased from 3.7 million in 1994 to 9.3 million in 2017;

- Of the 9.3 million unemployed people‚ 6 million are under the age of 35 and young people show far higher rates of unemployment than older people;

- Of the 9.3 million unemployed people‚ 8.3 million are black and the unemployment rate for black people is between 4 to 5 times higher than that of white people.

The IRR said this was "a reflection of differing skills profiles". According to Mackay‚ “We estimate that reducing South Africa’s unemployment to international norms will require doubling the number of people with a job over the next decade. That will require sustainable growth rates significantly in excess of 6% of GDP."

"At the current rate of economic growth‚ there will be limited job creation – and quite possibly‚ job shedding across several industries. This will worsen the unemployment crisis...‚" she added.

Hundreds of informal miners‚ known as zama-zamas‚ marched to the Department of Mineral Resources in Pretoria on Tuesday. The miners‚ who mostly work ...
News
4 years ago

SMEs to SOEs: show us the money!

Recession may lead to a fall in IDC funding

But the corporation should not be asked to bail out ailing parastatals, says CEO
Business Times
5 years ago