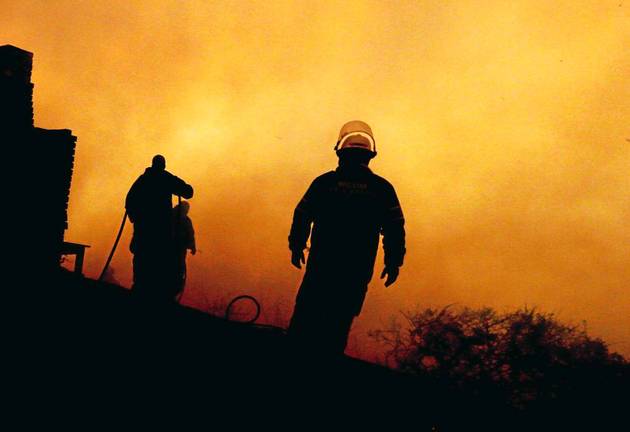 Fire-fighters battle to save a house in Buffalo Bay near Knysna as the fires along the Garden Route flared up again, fanned by gale-force winds.
Image: ESA ALEXANDER

Rights group AfriForum on Tuesday revealed that it was seeking a commission of inquiry into what led to the Knysna fires‚ which resulted in several deaths and numerous houses being destroyed earlier this year.

Speaking at a press conference at the group’s headquarters in Centurion‚ Deputy CEO Ernst Roets said he had written to Western Cape Premier Helen Zille to request the inquiry.

Roets said he had previously spoken to Zille‚ who had expressed the importance of the truth being revealed about the disaster.

AfriForum had commissioned forensic investigator Dr David Klatzow to probe the June fires‚ which ripped through over 300km of land in two weeks.

Klatzow is due to release his report on the investigations on Tuesday.

Last week‚ the Knysna fire chief released a report following his own investigations into the fire.

The report by Clinton Manual stated that the fires were as a result of human activity.

It is highly likely that a person started the fire that devastated Knysna in June‚ says the Garden Route town’s fire chief.
News
4 years ago

A handwritten note tucked away in the pocket of a donated jacket restored hope to Knysna fire victim Quentin Haman at a low point in his life.Haman, ...
News
4 years ago