King Zwelithini demands a 100% matric pass rate for his birthday 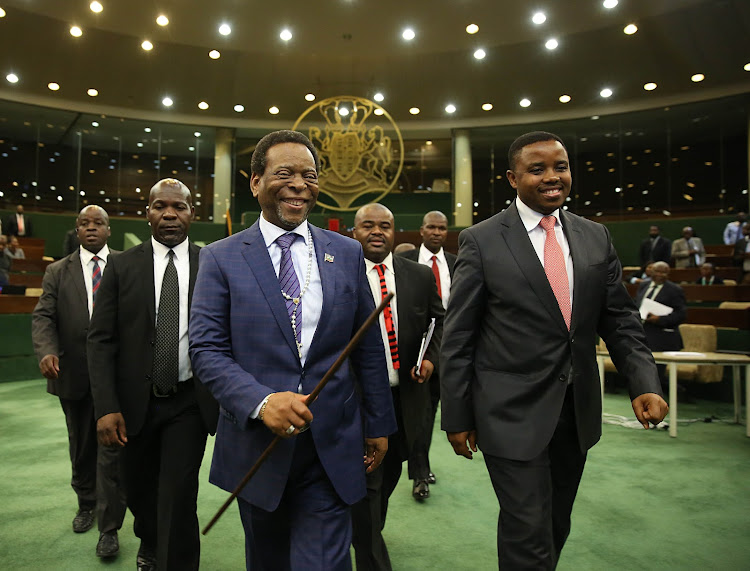 August 22, 2017. His Majesty King Zwelithini and MEC for Education in KwaZulu-Natal Mthandeni Dlungwane during a meeting with high school principals from Zululand and Amajuba districts at the Old KwaZulu-Natal Legislature in Ulundi.
Image: THULI DLAMINI

Zulu King Goodwill Zwelithini has demanded that the KwaZulu-Natal education department achieve an 80% pass rate in this year's matric exams - and then to honour his 70th birthday next year‚ a 100% pass rate.

Zwelithini was addressing more than 700 principals from the Zululand and Amajuba districts in Ulundi on Tuesday in his capacity as patron of education in the province.

His new-found status as patron was a result of a meeting he had with KZN education MEC Mthandeni Dlungwane earlier this year‚ during which he was presented with a full report about the province's Matric results.

The department has set itself a target of a 76% matric pass rate for this year.

But Zwelithini said there was no reason why the department could not achieve 80%.

"Then next year you can achieve 100% when I turn 70. This can happen we improve certain subjects. The ball is in your court‚" he said.

The king‚ who slaughtered two cows for the principals‚ implored them to be jealous of education‚ which he described as the "light for the nation".

The Department of Basic Education has proposed dropping the requirement for grades 7‚ 8 and 9 to pass maths and reducing the pass mark for home ...
News
3 years ago

"We need to be jealous of our education. We need to protect the dignity of results in all grades. We must not waste a lot of energy on matric at the expense of lower grades. Matric is like reaping what has been sown in lower grades. If you've not sown the right seeds you can't bother about reaping a good yield."

In a speech characterised by jokes‚ Zwelithini spoke hard about the teaching profession as a calling and a key for the future of the country. He said the fact that the education department received the largest chunk of the country's budget meant there must be more positive results.

"There is a big challenge for our principals to make sure that things are being shaped far better than worse. Education is the light of the nation."

He said while South Africa achieved political freedom in 1994‚ the biggest challenge now was what contribution people were making to that freedom.

"What's important today is to do work that is going to uplift our children‚" said Zwelithini.

He said while there were problems with children‚ principals should also ask themselves if they were not a problem in their own schools. He said some schools were now worse than during apartheid when teachers were highly regarded.

Principals of KwaZulu-Natal schools with a 0% matric pass rate could be axed as part of the Department of Education's performance improvement ...
News
3 years ago

"Our schools are in a situation that we never thought about during apartheid."

He said teaching was a calling and not an opportunity to increase the numbers.

"I'm happy because you are principals. I'm also the principal of my kingdom‚" he said to laughter.

Zwelithini lashed out at those schools which had become taverns and drug dens and teachers who abused alcohol.

"Our jealousy should ensure that our schools are not taverns and drug dens but centres of learning. We can't allow a situation where our children are turned into useless drunkards. We have a problem of taverns near our schools‚" said Zwelithini.

The king also warned that the country's education was at risk of being disrupted by the jobs-for-pals scandal which had rocked the department. This‚ he said‚ could result in the infiltration of the teaching profession with teachers who were not dedicated to their jobs.

"I know some of you are dedicated to their work but I'm saying those who have not tied up their shoelaces must do so."

He said it was even worse if education was being disrupted by teacher unions.

Principal explains why matric pass rate dropped by almost half to 34.1%

A principal has blamed the matric pass rate drop to just 34.1% at a technical high school in Khayelitsha on unsuitable teachers and a lack of support ...
News
4 years ago

"I know you are facing a lot of problems in schools and we need to deal with those. Education needs to be prioritised but it needs dedicated people. Children need leadership from principals."

Bhekisisa Phineas Zondi, principal of Fundukhaliphe High School in Nongoma, said he was encouraged by the king's speech, especially his call for parents to play a role in their children's education.

"It's a challenge that parents are removed from schools. We also have a problem with some teachers who are not dedicated and that means that there's no balance in terms of our work. I was encouraged that my leadership should be an example to others as well."

Petros Nhlanhla Mthethwa, the principal of Hhamu High School in Vryheid, said he was pleased that the king encouraged them to work hard to increase the matric pass rate from 76% to 80% and 100% next year.

"We are going back to work very hard in all subjects especially maths and physical science which have been identified as contributing factors in lowering our matric pass rate."

Makhosazane Buthelezi, the principal of Nhlazadolo High School in Blood River, said she did not expect the king to give them such good advice. "We are very motivated by his speech and will go back to implement all the things he has suggested. And we hope parents can also stop shifting all the work to teachers and also play a meaningful role."