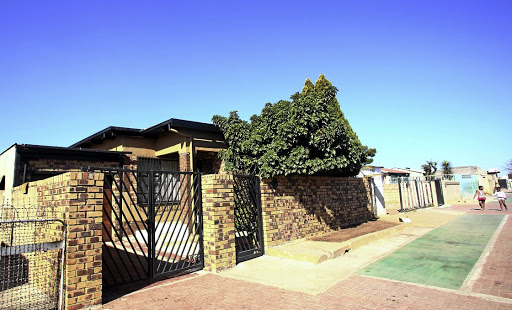 MOGUL'S MANSION A house in Meadowlands, Soweto, that doubles as the base of Mzwanele Manyi's Lodidox media empire Picture: Masi Losi

South Africa's newest media powerhouse - the new owner, for R450-million, of the Gupta family's media assets - has a humble base at a face-brick house in Meadowlands, Soweto.

The Gupta family's Oakbay sold its shares in the media companies to Lodidox in a vendor-financed deal - it lent Lodidox the purchase price.

But the headline-grabbing deal was news to those at the Meadowlands property, which is the registered address of Lodidox.

Lodidox appears to be a shelf company. It was inactive from its establishment in 2012 until Manyi became its sole director in June.

The Times visited the house in a residential area of Soweto.

It has a single garage and is tightly wedged between two other properties.

Lobby Manyi, who lives there, knew nothing of a business being run from the premises and had not heard of Lodidox. He said Mzwanele Manyi was his uncle and did not live there, but had an office on the property.

Occasionally, he said, activities of "The Decolonisation Foundation" took place there.

But inside the house there was a fancy reception area with gleaming tiles, a reception counter and a phone.

His friends said they were "just hanging" outside with Lobby and were not involved in a business.

The accounts of The New Age and ANN7 are to be closed by their bank at the end of the month. Analysts say the transaction with Manyi, a well-known Gupta ally, might be subjected to banking compliance scrutiny.

The Bank of Baroda is due to end its banking service to the Guptas at the end of August, sparking suspicions that the deal with Manyi was done to secure a new bank account for the Guptas.

But Manyi - who did not respond to requests for comment - said in an interview on ANN7 that the deal was about "radical economic transformation".

An employee, who asked for anonymity, told The Times's sister newspaper Business Day that he and his colleagues hoped that the sale meant that "a new bank" would come on board and salaries would be paid.

Economist Dawie Roodt said: "Banks aren't going to touch this. It is obvious to a blind man what is going on."

Wits School of Governance professor Alex van den Heever said the sale "did not appear legitimate" and the banks would be on edge about it.

In the third episode of our Stolen podcast, we talk about what it takes to be an investigative journalist and why it’s better to have a knife in a ...
News
4 years ago

Van den Heever said the transaction did not make sense because media companies were struggling financially - so Manyi was borrowing hundreds of millions to invest in a risky business.

Manyi said on ANN7 that the criticism of the deal was because he was black. He said the transaction made business sense.

"When the business selling the business is so convinced that you are going to make a success of it, they are willing borrow you the money [sic].

"I am the poorest man in the country. I have R450-million that I owe at a particular interest rate that makes sense to me."

Embattled former SABC COO Hlaudi Motsoeneng says he cannot reveal his strategy just yet amid speculation he could be taking up a job at ANN7.
News
4 years ago

On a video seen by Business Day, The New Age/ANN7 editor-in-chief Moegsien Williams told employees that the Gupta family had decided to "abdicate its executive role" in their companies.

"But in the last few months, as you may well have noticed, the situation has become even worse for us," Williams said.

Manyi told ANN7 that the company would abide by the press code, be editorially independent and have "integrity and honesty".

He said he would provide story ideas.

"I see this as Government Communications Information Systems on a grander scale," he said. "It is GCIS for the country.''

Manyi is a former head of the GCIS.