Millions in SA are starving 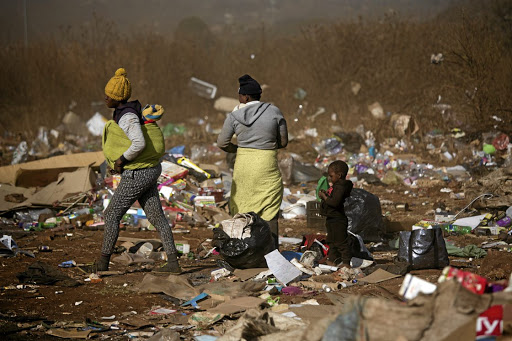 WASTELAND Women with their children collect waste for recycling in Mooiplaas, near Pretoria Picture: DANIEL BORN

Meet the face of poverty in South Africa - a black African girl living in a rural settlement in the Eastern Cape with no formal education.

This is according to a Stats SA report measuring poverty trends between 2006 and 2015. The report, released on Tuesday, showed that in 2015 a quarter of the population, 13.8million people, were living in extreme poverty and below the food poverty line of R17.48 per person a day.

This is the amount needed to afford a person's minimum energy requirements, but not including nutrition.

More than half the population, about 30.4-million people, were found to be living below the upper-bound poverty line, which is made up of people who can buy adequate levels of food and non-food items but are still considered poor.

Poverty decreased between 2006 and 2011 but then increased again. This was when the financial health of households declined under the weight of economic pressure. More households and individuals went into poverty.

The Pieterse family - living on R10 per person per day

The tiny farm house in Stellenbosch is cold and dark. Rain crashes to the ground and the soil quickly turns to mud but Katie and Adam Pieterse wear ...
News
4 years ago

"The past five years, notably between 2011 and 2015, have been a rough economic roller- coaster driven by a combination of international and domestic factors, such as low economic growth, continuing high unemployment levels, low commodity prices, higher consumer prices [especially for energy and food], lower investment levels, greater household dependency on credit and policy uncertainty," the report said.

The increase is an improvement on a decade ago when it was estimated that two of every three South Africans lived in poverty.

The StatsSA report was compiled using data from the Living Conditions Survey and the Income and Expenditure Survey, which measure household spending.

Social wages - including grants, free primary healthcare and no fee-paying schools - have played a big role in reducing the effect of poverty on the population.