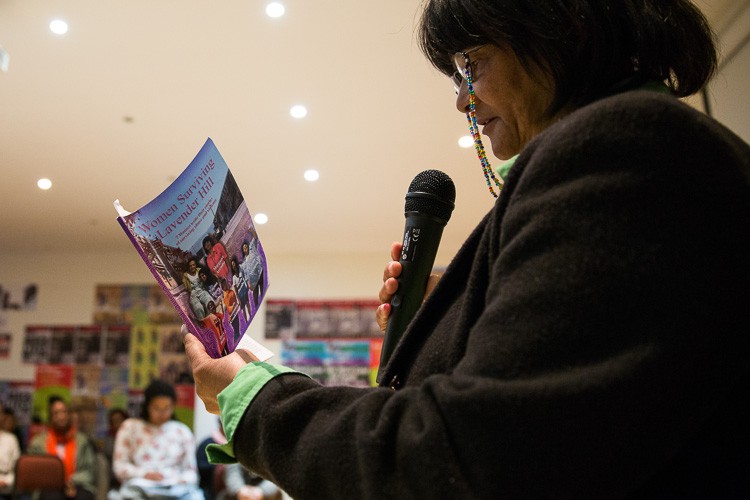 Margaret Arendse reads an extract from Women Surviving Lavender Hill. She is one of seven women who shared their stories in the book.
Image: Ashraf Hendricks

Lavender Hill resident Sheila Jacobs was assaulted by her son for 15 years.

It was difficult to put him in jail‚ she said. No one in her family knew‚ so she felt very alone.

“I nearly stabbed him to death‚” said Jacobs‚ as she recalled the day she decided to call the police to arrest her son.

Jacobs was speaking at an event hosted by New World Foundation (NWF) and Alternative Information and Development Centre (AIDC) on 22 August in Observatory‚ where seven Lavender Hill women read from a book in which they described their experience of abuse and violence in their community.

Kim Pillay‚ programme manager of NWF‚ said the book had been written to inspire healing in other women who had faced similar trauma.

Jacobs’s son was arrested and tried in 2003‚ but she said he spent only one month in jail. When he came out he returned to work and went to get help‚ and they were reconciled.

Valerie Adams‚ one of the writers‚ read a paragraph about how she had been sexually abused by her godfather and had never told anyone about it until she attended a 16 Days of Activism workshop held by NWF.

She said that when her son found out about the book‚ he wanted to sue her for writing about their family. Her daughter had distanced herself from the family after the book was published.

Veronica Kroukamp shared her experience of losing her son to gang violence. She told the audience that her son‚ who had often been involved in gangs but had left the gangs at the time‚ was acting strangely the day before he was shot and killed.

A Cape Town mother whose daughter was allegedly beaten to death by her boyfriend hopes her death will spark action that will help to end the abuse of ...
News
4 years ago

She said he kept saying: “I’m going to meet my Jesus before you.” The next day‚ he was shot and killed.

Mary Bam‚ who lived on the street for most of her childhood‚ explained the abuse she experienced in her marriage to her first husband.

When she wanted to get a divorce‚ she said‚ she was told by the Magistrate’s Court to “go back and work on your marriage”.

She described an incident where she asked her husband when he was going to get a job. This angered him so he put her head in the coals and set her hair alight. She told the audience: “I managed to save some of my hair as you can see”‚ while pulling at her hair.

At question time‚ members of the audience thanked the women for their bravery and for standing up to people who threatened them throughout the writing process.

Pillay explained that there had been 14 writers initially but some had pulled out because family and friends had intimidated them.

One member of the audience asked the women what advice they would give children living in Lavender Hill today and facing similar abuse. Bam responded that children should “speak out and reach out”.

“If you want to cry‚ my shoulders are broad and wide‚” said Bam.

She said she had been forced to deal with the trauma and abuse on her own but now there were resources available in the community.

This article was first published on GroundUp