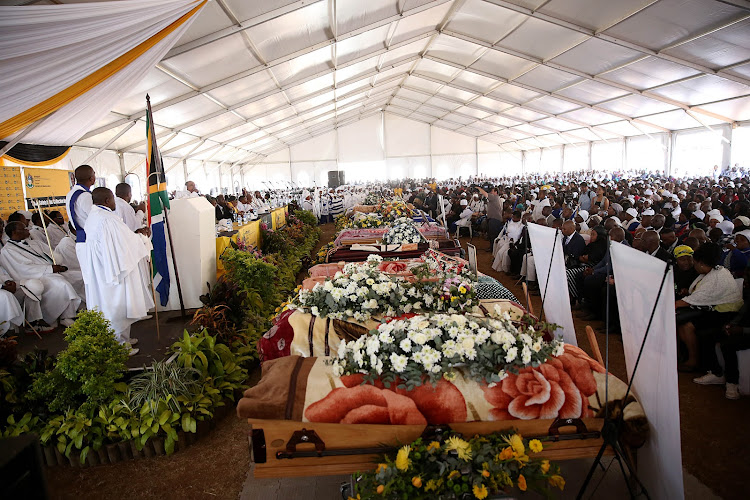 A KwaZulu-Natal taxi driver could face murder charges following the fatal crash that claimed the lives of 19 people.

KZN transport MEC Mxolisi Kaunda told thousands of mourners at a mass funeral on Saturday morning that culpable homicide charges were not enough. He said the driver knew the taxi was overloaded and unroadworthy‚ and should therefore be charged with murder.

Nineteen framed pictures rested on top of blanket-covered coffins‚ a chilling reminder of the lives that were lost in a horrific minibus crash west ...
News
4 years ago

Thousands of people attended the mass funeral for the 19 victims‚ who died when the minibus taxi that was ferrying congregants to a tombstone unveiling ceremony overturned at the Msunduzi Bridge near Nagle Dam in KwaXimba‚ halfway between Durban and Pietermaritzburg. It was reported that the taxi was overloaded and is alleged to have experienced break failure.

SAPS confirmed earlier in the week that the driver‚ who is under police guard in hospital‚ would be charged with 19 counts of culpable homicide and with reckless and negligent driving.

“To the taxi industry‚ do not pack our people into taxis like fish. This is a warning: stop transporting our people in unroadworthy cars‚” she said.

Meanwhile‚ Transport Minister Joe Maswanganyi confirmed at the funeral that parliament would meet next month to debate the Administrative Adjudication of Road Traffic Offences Bill. He said accidents like this one showed how necessary the controversial and much-delayed piece of legislation was. The debate would take place on September 5.

"Amongst the remedial measures we are going to apply is that if we find a person driving an unroadworthy taxi we shall withdraw the operator’s permit. We shall not allow operators on our roads with unroadworthy vehicles. Those caught speeding and driving unroadworthy buses‚ taxis‚ and cars will have their licence suspended for two years. And [it will be] jail for those driving without a licence. The licence disc on the vehicle will also be suspended should the vehicle be unroadworthy‚” he said.

Maswanganyi said that government would do what it could‚ but that it couldn’t change human behaviour.

"Road safety can't be achieved by government alone. It is a societal matter. We all need to embrace road safety. While we put crosses and wreathes in areas where our beloved ones have fallen as memorials‚ it also points to an unfortunate state of affairs on our roads‚” he said.

Presidential hopeful Nkosazana Dlamini-Zuma‚ who offered condolences to the families‚ said: “It always hurts when women die because they are the pillars of their families. To the families‚ we share in your pain; we may not feel the same pain as you but we cry with you.