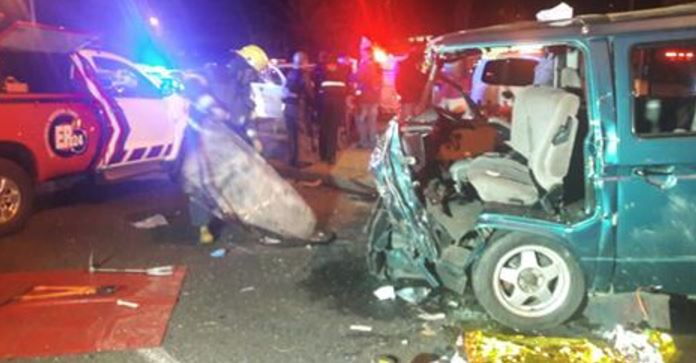 The exact circumstances of the incident were not yet known, investigations are underway.
Image: ER24 via Facebook

Two people were killed and several others injured when a kombi and a minivan collided in the Roodepoort area west of Johannesburg on Friday night.

The accident occurred on the corner of Ontdekkers and Golf Club Terrace roads in Florida Park.

Paramedics said injuries varied from moderate to serious‚ “When ER24 arrived on scene after 11pm‚ two occupants of the kombi needed to be extricated by the jaws of life. Fire along with ER24 extricated the two patients‚ both patients sustained serious injuries.

“Two males from the minivan unfortunately succumbed to their injuries and were declared dead on the scene. Multiple patients from the minivan were assessed and injuries sustained ranged from moderate to serious‚” ER24 spokesperson Ineke van Huyssteen said.

Various services were on scene including the fire department and City of Johannesburg EMS‚ she said.

“The patients were transported to nearby hospitals for further medical care.

“The exact circumstances of the incident were not yet known to our paramedics but the SAPS were on scene for further investigations‚” Van Huyssteen added.