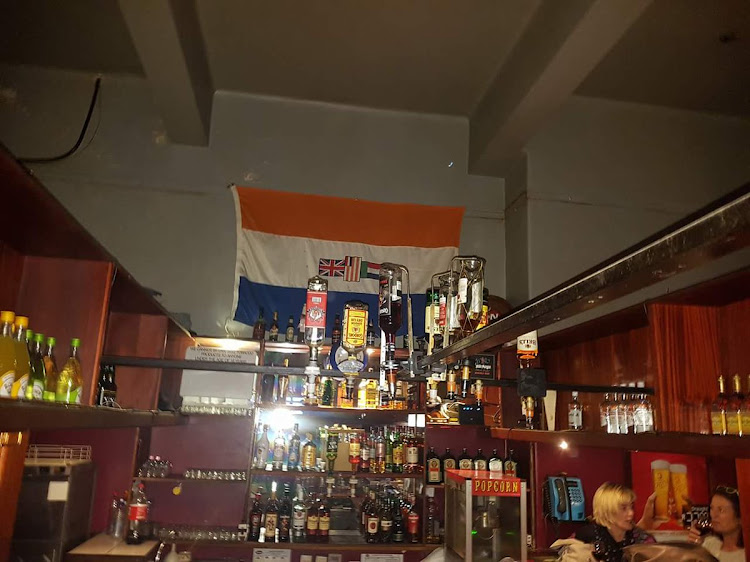 One user took to social media to detail the experience his friends had when they had enquired why the old South African flag was up on the wall.
Image: Twitter

Barmen at a Cape Town pub are receiving telephone threats after a dust-up over the old South African flag.

On Friday evening a group of friends were hanging out in a bar in Sea Point when they noticed the orange white and blue flag hanging above the bar area.

One user took to social media to detail the experience his friends had when they had enquired why the flag was up on the wall.

“A lawyer friend of mine and his buddies were arrested in Sea Point last night for kicking up a fuss about this flag at Brians bar‚” he tweeted.

“They called the cops to protect them after an argument with a Caucasian lady and her friends allegedly. They‚ Coloureds got arrested.

“Why is the symbol of our pain and suffering and oppression being displayed in 2017?

“They were held for 8 hrs and released this morning. Can’t say it surprises me....this is Cape Town.”

The initial post has since been shared more than 500 times on social media.

However‚ the owner of the pub‚ Brian Dunn‚ does not understand the fuss surrounding the flag as it has been hanging there for years.

“Oh my jeez‚ the flag? That is not the only flag‚ I have 30 flags in there. That flag did nothing‚ it’s the politicians that did the problem‚ not the flag‚” he said.

Dunn said that patrons from all over the world enter the bar and they ask to hang up their country’s flag to which he obliges.

“All the flags in my place are donated. I put it up there because it is a talking point. I have all the old flags like Namibia. I have the old Rhodesian flag hanging there also‚” he said.

The barman on duty had phoned his boss after a verbal altercation ensued over the flag‚ Dunn said. Dunn has subsequently removed the flag from the wall.

“They threw 15 shot glasses at the barman on Friday evening‚ carrying on like complete idiots. I don’t care about a flag. That is not an Apartheid flag‚ it’s the politicians who caused Apartheid‚ not the flag‚” said Dunn.

“That South African flag has been up there for 12 years‚ it is only now that people are complaining. I can’t understand it. This is being blown out of proportion‚ the flag wasn’t put up to be a racist thing. A lot of people don’t even know what the old South African flag looks like‚” he said.

A barman working at the pub said that the phone had been ringing non-stop and that they have been receiving death threats‚ Dunn said.

“The pub has been here for 23 years and this is the first altercation that has occurred in this bar over the flag. We have been threatened now. We have been getting phone calls all day of people threatening us. So the damn flag is down but we are still being threatened. My life is actually in danger here. The barman who was on duty when the incident happened‚ his life is also in danger now.”

Police confirmed that three people were arrested on Friday evening at the bar.

Police spokesperson Sergeant Noloyiso Rwexana said: “Two men and a female aged between 25 and 26 were arrested by Sea Point police for being drunk in public.”