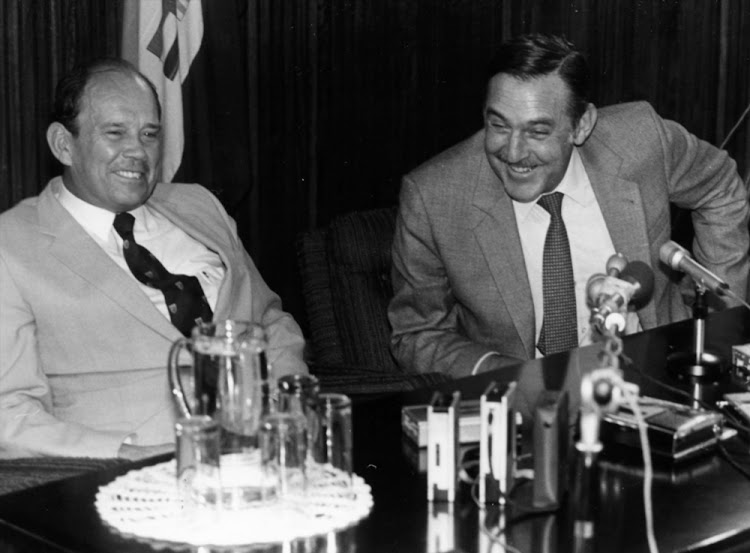 Former Minister of Defence, General Magnus Malan with Pik Botha. While Botha portrayed himself as a “liberal at heart”‚ academics believe archived papers might allow scholars to confirm or refute this.
Image: Sunday Times

Gupta leaks have flooded and shocked the country with information about state capture. But what about the “dirty deals” made during apartheid? Is it too late for those to be leaked?

Right now‚ they're classified and beyond the reach of the public. They're a tightly-packed can of worms that could answer some of the questions and contentious issues that still dog our country.

Were “economic deals struck that allowed existing powers to remain in tact”?

And just how far did the security forces' tentacles reach into the liberation movement that eventually came into power?

Now‚ a group of academics and activists are advocating for such documents to be declassified for the sake of scholars and “transitional justice for victims of oppression”.

Former deputy finance minister Mcebisi Jonas has rubbished ANC leaders who now claim not to have known about instances of state capture.
Politics
4 years ago

In other words‚ the can of worms could actually be a Pandora’s box if it exposes the inner workings of one of the most brutal regimes in the history of the world.

This came to light at a colloquium at Wits University last week at an event on “promoting open and transparent public record-keeping for a democratic South Africa”.

Ronnie Kasrils‚ former minister for intelligence services‚ said at the event‚ “We as South Africans‚ every one of us‚ need to know and understand the truth about the past and everything that took place."

Participants discussed how state-generated public records should be declassified. In that way‚ the documents of government departments that kept their own records could become public.

Co-organiser Gabriele Mohale‚ archivist of the university’s Historical Papers Research Archive‚ said that unlike in many other countries‚ South Africa’s National Archives has “no systematic process of declassifying records – you even have records from the Anglo-Boer War that are still not declassified”.

According to Noor Nieftagodien‚ associate professor of history at Wits‚ transparency on 'dirty deals' would show if this was a 'template' for what came after.

A Cape Town pub owner says he is getting telephone threats after a dust-up over the old South African flag.
News
4 years ago

It would also be a litmus test for how honest some politicians were in how they portrayed themselves to the public - Pik Botha‚ for example.

Philip Murphy‚ a British academic with an interest in oral history and apartheid‚ told Times Higher Education‚ that Pik Botha portrayed himself as a “liberal at heart”‚ but that the archived papers might allow scholars to “see how far the historical record bears out his public statements.”

Researchers based in other countries can also see new avenues for research emerging from the archives.