BLF students protest in solidarity with learners at Durban school 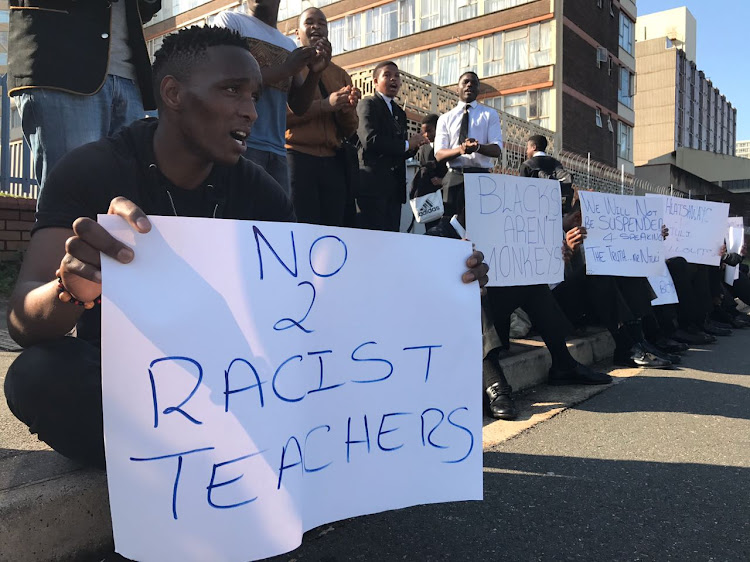 A small group of protesters, including the Black First Land First Student Movement and several pupils from the school, embarked on a protest outside the George Campbell Technical School central Durban campus on Monday.
Image: Jeff Wicks

Racial tensions at the George Campbell Technical School continued to simmer as the Black First Land First Student Movement embarked on a protest outside the central Durban campus on Monday.

A small group of protesters‚ including several pupils from the school‚ gathered outside the gate. They stood opposite a group of police officers deployed to monitor the demonstration.

This follows a week of turmoil at the school after learners spoke out against what they called systemic racism. They complained that staff regularly called them racially offensive names.

Their protest prompted the Department of Education to launch an investigation into race relations at the school. This resulted in the suspension of two staff members and several pupils who were seen as protagonists in the protest.

BLF-SM chair Thobani Zikalala said the body had noted "with disgust" the acts of racism at the school.

"Twenty-three years after the 1994 rainbow nation project‚ and still racism has not been defeated‚ continually revealing its ugly head as the fabric of society remains rooted in colonial land theft‚" Zikalala said.

"We are always in solidarity with all suffering black bodies. In light of our stance on the struggles of black people‚ the BLF-SM UKZN Howard College would like to express our solidarity to the black learners at George Campbell‚ who on countless occasions have been subjected to racism by the white teachers and the white staff at large at the school.

"The struggle of the black population from all walks of life is interconnected and thus the call is for unity in the fight to end racism."

Durban school teachers fear for their lives after pupil protest

The KwaZulu-Natal education department and the National Professional Teachers Organisation have locked horns as race tensions at the George Campbell ...
News
4 years ago

Calm was restored at the George Campbell School of Technology in Durban on Monday morning after days of protest action linked to racial tensions.
News
4 years ago