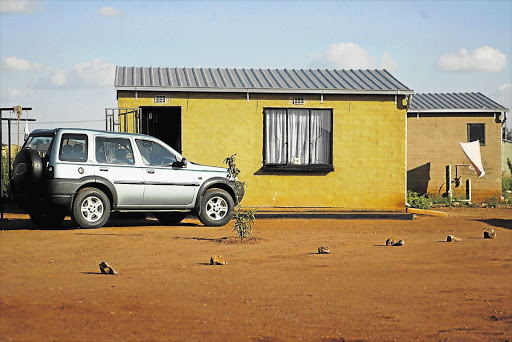 The awarding of RDP housing needs to be transparent.
Image: MUNTU VILAKAZI

Teboho Nthoba and his parents hoped their living conditions would improve after they were promised an RDP house in Fleurhof west of Johannesburg.

But now more than a year after the promises were made to him and his family‚ they still live in a corrugated iron shack in the nearby Zamimpilo township where a protest over housing issues saw major roads blocked on Monday morning.

A Rea Vaya bus station was destroyed by residents who were demanding that the MMC for housing‚ Mzobanzi Ntuli‚ address their concerns.

Nthoba‚ 21‚ and his parents lost almost all of their possessions during a blaze in the township last week‚ which destroyed around 40 shacks in the township.

"It's tough. We lost everything. Even my school reports were burnt. I only have my ID left‚" he said.

Residents from the Zamimpilo informal settlement in Johannesburg blocked roads as they started protesting in the early hours of Monday morning.
News
4 years ago

Conditions in Zamimpilo are tough - the community shares communal taps and toilets‚ with residents complaining about the environmental and health risks involved as well as the high level of crime in the area.

Nthoba said the fire was started last week after a group of men stabbed a man and set his shack on fire following an argument earlier in the evening.

His mother‚ Theresa‚ said she believed the blaze that destroyed the shacks could've have been avoided if they were moved when the promises were made to them.

"All our papers are burnt. All I have left is my ID book. So we can't even get an affidavit at the police station because they say that they have no track record of how long I've lived here‚" she said.

"This means that my house is gone. A house I had registered for since last year‚" she said.

The family said they were able to rebuild the outer structure of their house after some donations‚ but the house still had broken windows and a dust floor.

Zamikile Majibhane‚ 41‚ says he has been waiting since 1998 for Eskom to provide electricity to the informal settlement where he lives‚ Zone 8 in ...
News
4 years ago

Besides losing those papers‚ the family lost curtains‚ a new bed they recently purchased and other furniture.

Community members on Monday morning blocked roads including Commando Road and Main Reef Road after numerous requests to the City of Johannesburg for an update about what was happening with the allocation of RDP houses.

Nomsa Kayise‚ a local community leader‚ said the city had promised to move them to RDP houses which would have drastically improved their living conditions.

"It's been more than a year and nothing has happened. We've written letters‚ sent emails and smses and still the MMC [for housing] hasn't come to see us‚" she said.

"They allocated 400 units for people to move to‚ but so far only 112 have moved‚" Kayise said.

Basil Douglas‚ the ward councillor for the area‚ said he had requested the MMC to come and address the community.

He said a representative of the MMC's office came to speak to him on Monday morning‚ but left after feeling intimidated.

A volunteer working at the City of Johannesburg’s Ivory Park Housing Department offices was arrested on Friday by the Hawks for illegally selling ...
News
4 years ago

Buntukazi Xuba‚ spokesperson for the MMC of housing‚ said: "The MMC was delayed in receiving the allocation list from the region officials. As such the MMC didn’t want to comprise the allocation processes by allocating the beneficiaries without the list as the new administration wants the allocations process to be transparent.

"The MMC is now in receipt of the allocations list and he will meet with the Zamimpilo leadership later today (Monday) and together they will craft a way forward‚" she said.

He said police were still investigating the damage caused to a Rea Vaya bus stop on Commando road and that no arrests had been made.