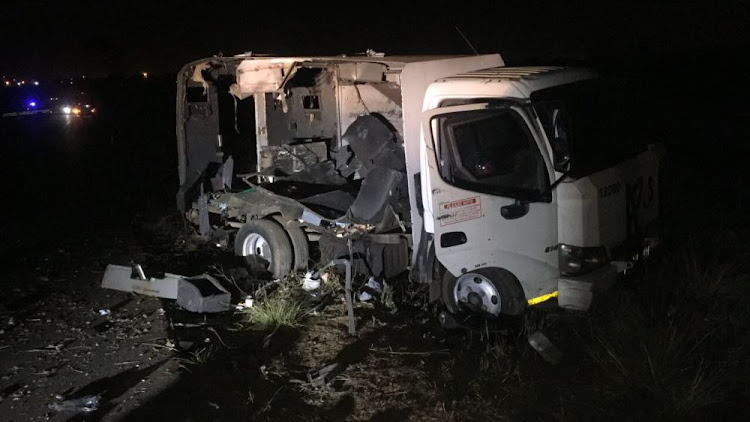 CIT bombing of a G4s van on the R21 in Olifantshoek area.
Image: Jeff Wicks

Two G4S cash-in-transit guards were slightly injured when about 20 armed robbers blew up their van outside Pretoria.

Sources told TimesLIVE the guards were stopped on the M57 near the St Georges Hotel.

"The robbers‚ who were in five cars including a VW Amarok bakkie and a Porsche Cayanne‚ forced the van to stop.

"They packed the side‚ where the cash is held‚ with explosives and blew it to pieces‚" said a policeman.

Another police officer said the suspects had made off with a huge amount of cash including firearms.

"These guys were professional. This was done quickly and effectively. There were about 20 gunmen who opened fire on the guards from different positions.

"It (the attack) was executed with military precision‚" he said.

He said the guards were fortunate not to have been killed.

"It’s actually a miracle they weren’t if you look at the damage to the van."

The story is developing.

A Parlock factory worker – caught in the crossfire during a gun battle between police and cash-in-transit robbers in Durban on Monday – recounted the ...
News
3 years ago

Six suspected robbers died in Durban on Monday after two separate gun battles with police in a chase that spanned several city suburbs.
News
3 years ago