Residents from the Zamimpilo informal settlement in Johannesburg blocked roads as they started protesting in the early hours of Monday morning.

Major routes‚ including Main Reef Road‚ were blocked as the community protested over housing conditions and the city's failure to move them to RDP houses in the nearby Fleurhof.

"It's been more than a year and nothing has happened. We've written letters‚ sent e-mails and SMSes and still the MMC [for housing] hasn't come to see us‚" she said.

"They allocated 400 units for people to move to‚ but so far only 112 have moved. We are planning to stay here until the MMC comes here." Conditions in Zamimpilo include residents having to share communal toilets and taps‚ and a week ago more than 40 shacks burned down.

Kayise said residents were still trying to rebuild after the fire.

Basil Douglas‚ the ward councillor for the area‚ said he had requested the MMC to come address the community.

He said a representative of the MMC's office came to speak to him on Monday morning‚ but left after feeling intimidated.

Chief superintendent Wayne Minnaar said metro police had cleared the blocked routes. He said the police were still investigating the damage caused to a Rea Vaya bus stop on Commando Road and that no arrests had been made. 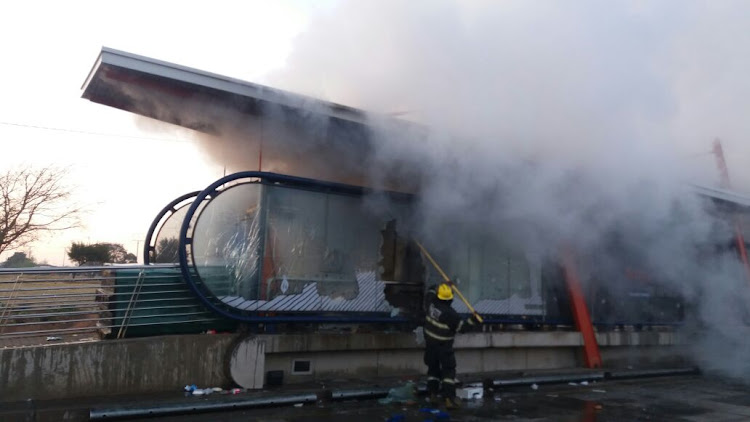 Chief superintendent Wayne Minnaar said police were still investigating the damage caused to a Rea Vaya bus stop on Commando Road and that no arrests had been made.
Image: City of Joburg‏ via Twitter