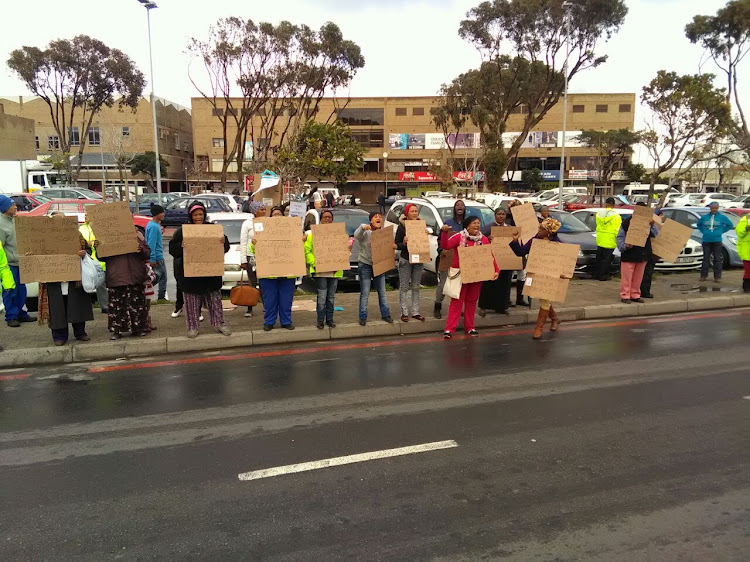 Members of Mitchell's Plain Crisis Forum demonstrate outside the court where a 49-year-old man appeared on Wednesday charged with raping a five-year-old girl.
Image: Aron Hyman

The “fed-up” community of Mitchell’s Plain demonstrated at the court where a man accused of raping a 5-year-old girl appeared on Wednesday.

The 49-year-old was assaulted during his first court appearance last week. On Wednesday the gaunt man‚ with curly greying hair styled in a mullet‚ did not look towards the crowd in the Mitchells Plain Magistrate’s Court gallery.

The residents were marshalled by the Mitchell’s Plain Crisis Forum‚ which said it wanted to put pressure on the justice system by showing the community’s outrage at such cases.

“At these court appearances it’s usually just the victim and a few family members present. I think these days the judges see that we are tired of this‚” said forum chairman Joanie Fredericks.

She said residents’ presence in and outside courts had prevented the possibility of family members‚ witnesses or victims being intimidated by suspects.

Community members had attended every case involving violence against women and children since the rape and murder of 11-year-old Stacha Arendse in Tafelsig five months ago‚ said Fredericks.

Speaking outside court on Wednesday‚ the girl’s distraught grandfather and great-grandfather said they wanted justice and for the ordeal to come to an end. The girl’s mother‚ who is seven months pregnant and receiving medical treatment for trauma‚ was also in court.

The grandfather said he knew the accused‚ having worked for his mother a few years ago. “There were already stories like this‚ I’m not afraid to say it‚” he said. “I went to drop him at his house two or three times if he was drunk and his mother asked me to.”

He said his granddaughter was back in creche. “She told me that [the suspect] was going to kill her‚ he told her that after he raped her‚” he said.

The little girl was receiving counselling and would sometimes talk about what happened. In one instance‚ they drove past a supermarket where the man had taken her with promises of sweets and a fidget spinner.

“I had to take her her mind off that and change the subject. There were other kids in the car. I don’t want her to remember those things‚” he said.

The case was postponed after a witness for the accused’s identity parade could not be located.