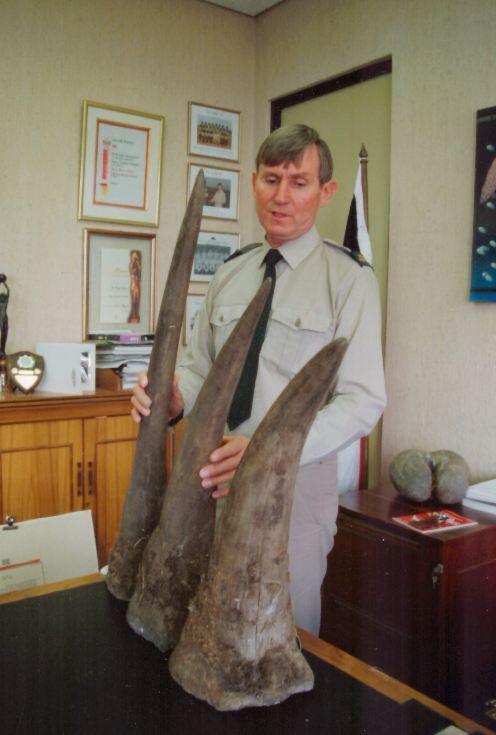 The former head of Africa’s most successful rhino conservation agency has sprung to the defence of local rhino baron John Hume.

Dr George Hughes is a zoologist and former game ranger‚ who rose through the ranks to become chief executive of the renowned Natal Parks Board.

He lauded Hume's efforts to multiply the species at a time when more than 1‚000 rhinos are butchered each year by criminal poaching syndicates.

“John is one of the most successful rhino farmers the country has seen and should be lauded for creating a population of real significance. He has been doing what the formal conservation agencies have been promoting for decades‚” Hughes said.

Hughes said Hume should be praised rather than pilloried for his attempts to breed rhinos and sell the horns legally without killing them.

All the world's surviving African white rhino are descended from a tiny remnant population of about 50 rhinos in the iMfolozi Game Reserve‚ which was guarded and slowly multiplied by the Natal Parks Board by moving them to public and private reserves across the continent.

Hughes has advocated for the resumption of controlled horn trading for several decades.

He presided over several game auctions where the Natal Parks Board (now Ezemvelo KZN Wildlife) encouraged private ranchers like Hume to buy rhinos in an attempt to multiply their numbers as an insurance policy against illegal poaching.

Hume is the largest private rhino owner in the world‚ with a herd of 1‚500 in the North West province.

Hume has been making global headlines recently after announcing plans to sell an initial 500kg of his 6 ton horn stockpile in an online auction.

Rhino poachers have set a new record in bloodshed in KwaZulu-Natal – the highest killing rate in more than a century.
News
4 years ago

Several conservation and animal welfare groups have sought to cast Hume as a profit-seeking opportunist who was sabotaging campaigns to safeguard rhinos.

But Hughes swam against the mainstream of media commentary at the weekend‚ saying it was “bizarre and strange in the extreme” that Environment Minister Edna Molewa and her department had not thrown their weight behind the rhino breeder's efforts to open up a new legal market for rhino horns.

South Africa's current rhino conservation strategies were indefensible and financially unsustainable‚ he said‚ noting that South Africa had lost more rhinos to poachers in the last six years than over the past 50 years.

“It is a dead-end strategy that is doomed to failure‚” said Hughes‚ who has represented South Africa at several international conservation meetings to plan rhino protection strategies.

“You can't expect farmers to put in a huge amount of money that is not going to give them a return on investment. (Wildlife ranching) is a perfectly legitimate business that has been going on for decades.”

Hughes acknowledged that several opponents of legalised rhino trade were unlikely to be persuaded otherwise.

South African rhino baron John Hume has lashed out against Environmental Affair Minister Edna Molewa‚ blaming her for the “disappointing” results of ...
News
4 years ago

“It is a bit like trying to persuade a person who is deeply religious to give up their beliefs ... but right now we are on a roller coaster ride to the near extinction of the rhino in the near future. A perfectly legal trade has to be tried – otherwise I can assure you that the work done by the Natal Parks Board and Ezemvelo will have been futile.”

As custodian of the overwhelming majority of the world's remaining rhino population‚ Hughes maintained that South Africa should simply notify other member states of the Convention on International Trade in Endangered Species (CITES) that it intended to resume trading rhino horn internationally.

“To paraphrase Einstein‚ you can't keep pushing the same strategies that have been a failure.”

The alternative‚ he suggested‚ would be a form of increasingly intensified fortress conservation‚ where rhinos ended up as zoo attractions‚ guarded 24 hours a day in restricted spaces.

“I am appalled to see rhinos now roaming in several private and public game reserves with no horns (because they are removed for security reasons).”

The 78-year-old conservationist dismissed the view that rhinos‚ as one of the iconic Big Five wildlife species of Africa‚ should never be farmed commercially.

“Wringing your hands over this is nonsensical. We export tens of thousands of ostrich and springbok to Europe each year. So why not (farm rhino)?”

Hughes was not troubled by speculation that horns sold on the domestic market would ultimately end up in China‚ Vietnam and other Eastern consumer nations.

He said he no problem with horns being bought by speculators in anticipation that the 40-year-old CITES ban on global horn trading would ultimately be lifted.

“For things to be achieved in the international arena you have to have a champion. But ministers don’t always have an in-depth understanding of what they are supposed to be ministers of ... The path ahead is littered with problems‚ and I just don’t see anyone standing up for the sustainable use of wildlife. It should be a no-brainer to show that sustainable use of wildlife has been phenomenally successful in South Africa. Our tourism industry is worth billions … and that there is nothing wrong with rhino farming.”

Instead of helping to sustain rhino in wild habitats‚ the financial benefits of their horns were being lost to a black-market economy‚ Hughes said.