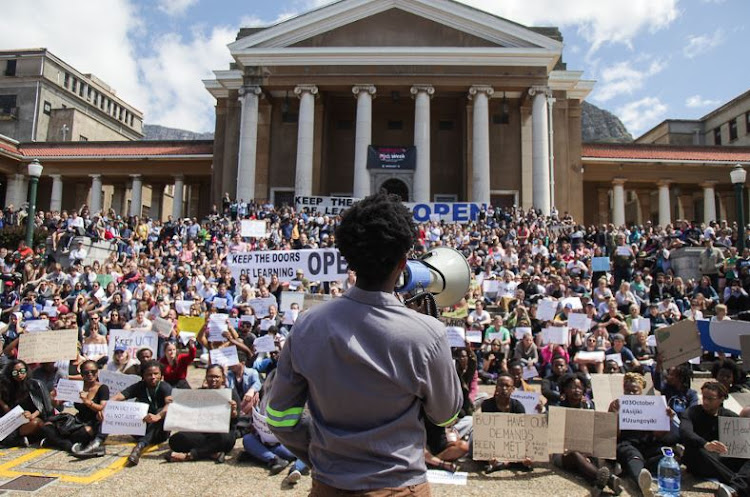 Students gathered for a mass meeting on Monday at UCT led by Fees Must Fall activist Athabile Nonxuba‚ who said any of UCT vice-chancellor Max Price’s “spies” should inform him that a shutdown will go ahead.

It is alleged that students received an email last week from the university’s student representative council that UCT will remove students who have yet to settle debts from residences.

A Fees Must Fall activist who attended the meeting told TimesLIVE the university was acting unfairly towards these students.

A visible shift in student politics

With Stellenbosch University’s Student Representative Council election results due to be announced on Tuesday‚ a visible shift in student politics in ...
Politics
4 years ago

“It’s about all the issues that UCT are avoiding. They are delaying and don’t want to solve problems. There have been unsuccessful negotiations and meetings. We’ve had enough‚” she said.

UCT spokesman Elijah Moholola confirmed that the protest motives were centred mainly on continuous negotiations regarding the conditions in which insourced workers are employed.

“The UCT executive has worked tirelessly over the past year to address issues and to ensure the smooth insourcing of previously outsourced workers at UCT‚” he said.

“The executive is still in negotiations with unions and workers on some issues and will honour this ongoing commitment to resolve any issues that may arise.”

He said 23 students were on a “grace period” following financial exclusion‚ saying the fees had been outstanding for 15 months.

“The UCT executive has honoured the commitment towards ensuring that all academically and financially eligible students are not excluded due to historic debt‚” he said.

Moholola was unable to comment on the extent to which classes would be disrupted‚ nor could he suggest what measures UCT would put in place to manage the protest.

The protest is scheduled to start at 6am. - TimesLIVE