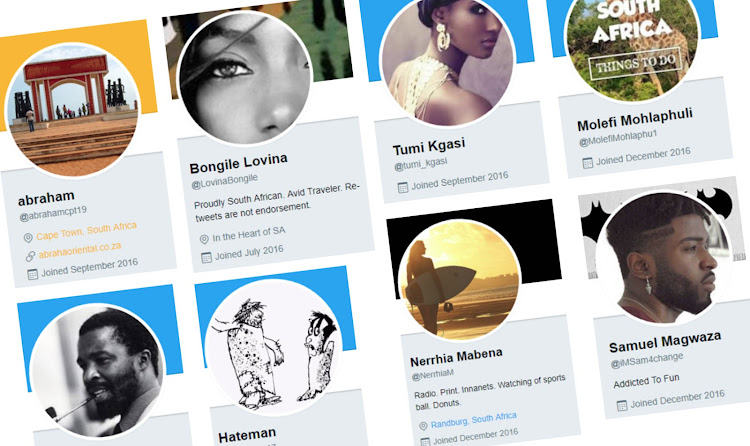 Some of the fake Twitter accounts identified in our investigation.
Image: ANCIR

The Gupta family’s propaganda campaign, allegedly assisted by Bell Pottinger, inaugurated South Africa into the epicentre of the era of fake news and propaganda which has grown in tandem with the dominance of news by social media platforms.

How does it work?

They offer services such as:

Trend Micro’s researchers identify distinct regions where prominent marketplaces exist, each with their own culture, tools and platform priorities. These are China, the Middle East, India and English-speaking communities.

The Russian community has a particular focus on using real humans to complete tasks through crowdsourcing platforms. Some of these darknet platforms to manipulate social media are very large. Vtope reportedly has two million “mostly real” users and SMOFast has roughly 500,000 registered users.

There is evidence that suggests that India, along with Bell Pottinger in the UK, were part of a multinational campaign of fake news sponsored by the Gupta family.

Internet sleuth Jean le Roux has followed the bot army for months. He first revealed its existence in the Daily Maverick when he showed how a sample of fake accounts was spreading the propaganda at exactly the same time, which indicated an automated campaign.

In other words, the accounts did not act as individual humans but as a trolling battalion acting for a political purpose. “It’s definitely multinational,” says Le Roux, who would send some of the accounts links. When those behind the accounts opened the links, it revealed to Le Roux that the accounts were generated from both South Africa and India.

The campaigners used rupee (the Indian currency) to use Google Ads or promoted tweets to increase the visibility of their messages. Some of the fake accounts were linked to documents that were often geo-located in India.

In other words, the Gupta family’s Twitter army left a digital footprint.

In addition, says Le Roux, his suspicions were piqued when the accounts carried names like Bongi Vorster and Dlamini Louw. While African-Afrikaans name and surname combinations are known, they are rare — but were very common in the fake army.

“It was as if someone had been given a spreadsheet of South African names and surnames which were then automatically generating combinations,” he says.

Then Le Roux sent the fake accounts messages in several South African languages other than English, and they couldn’t answer.

All this indicated a paid foreign army with its base probably in India.

While there is no direct evidence of Bell Pottinger’s role in this part of the campaign, the company has a long history of propaganda black operations. These “black ops” hide the creators of work that is designed to confuse and destabilise countries. The PR company has most recently been exposed for its work in Iraq where it created videos and other material to smoke out alleged Al-Qaeda operatives.

Wikipedia founder Jimmy Wales banned Bell Pottinger from editing on the open online encyclopaedia after it was found to have manipulated various entries.

The Bell Pottinger team that worked on South Africa also sanitised the Gupta family’s Wikipedia entry, as The Times has previously shown.

And continues in the following article: