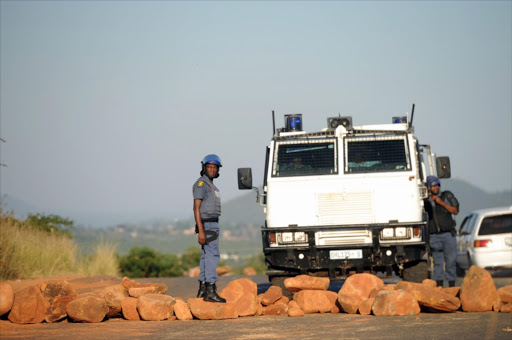 Police are on high alert in Vuwani in Limpopo‚ where residents have embarked on a "total shutdown" of services.

The Pro-Makhado Demarcation Task Team announced the shutdown on Friday after failed negotiations with government.

Vuwani was the scene of violent protests in May last year‚ when more than 20 schools were torched following residents' dissatisfaction with the proposed inclusion of Vuwani into a new municipality with Malamulele.

Similar incidents occurred in August and April this year.

"There is no schooling‚ no one is going to work. There is a total shutdown of services‚" said Alex Ramashau‚ spokesperson for the Pro-Makhado Demarcation Task Team.

Ramashau said the Pro-Makhado group had on numerous occasions requested meetings with the local and provincial government over their failure to provide the residents of Vuwani with services.

"Due to the lack of political will to resolve the dire situation in Vuwani‚ the Task Team started the process of engaging communities to seek new mandate and way forward as our people continue to suffer at the hands of Government which the people of Vuwani elected on the 2014 National General Elections‚" the group said in a statement on Friday.

Limpopo police spokesperson Brigadier Motlafela Mojapelo said police were patrolling the area and prepared for anything.

"We started deploying last night. We've warned people not to resort to violence‚" he said.

"We're not expecting any violence. According to our analysis‚ we don't expect any problems."

Police on high alert over threat of Vuwani shutdown

The troubled area of Vuwani in Limpopo is again facing total shutdown after threats from residents that they will take to the streets on Monday.
News
4 years ago

Culture of impunity behind lawlessness