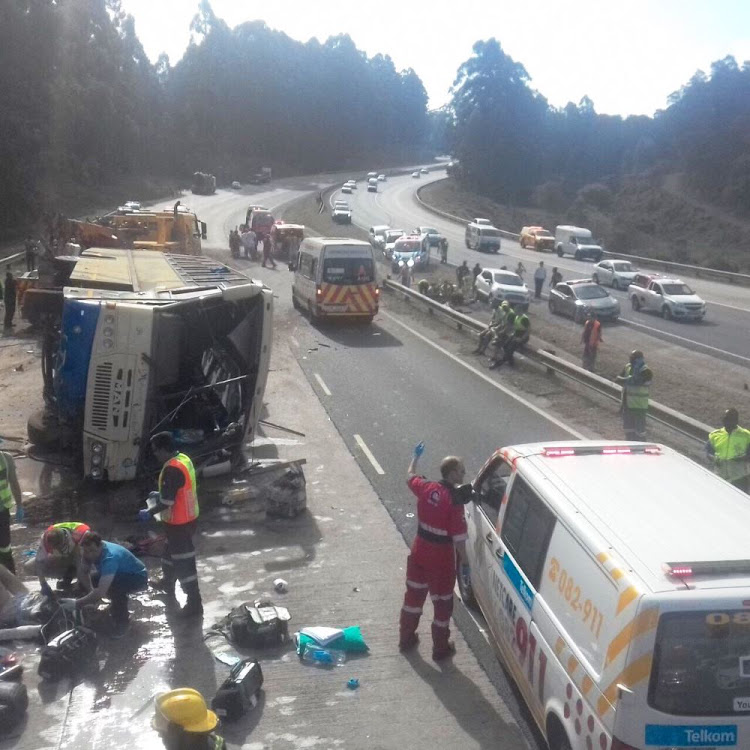 The crash claimed the life of a boy and left 47 others injured.
Image: IPSS MEDICAL RESCUE

The grounds of Michaelhouse resembled a ghost town as news of a bus crash‚ which left almost 50 pupils injured‚ spread around the school on Tuesday afternoon.

It would later emerge that the crash had claimed the life of a boy‚ Themba Dloti‚ and left 47 others injured‚ several critically.

“Everything stopped. You could look out on the field and just see sports gear left where it stood. Everyone has rallied in the chapel‚” Michaelhouse spokesperson Murray Witherspoon said.

Paramedics and emergency service personnel were on Tuesday afternoon attending to a bus accident on the N3 near Hilton in which scores of pupils are ...
News
4 years ago

He said despite having 520 boys silence hung over the school on Tuesday. “We could never imagine something like this happening when you wake up in the morning.”

It is understood that a bus had been bound for Kearsney College when the driver lost control of the coach.

Four under-16 soccer teams were on their way from Michaelhouse‚ in Balgowan in the KwaZulu-Natal Midlands‚ to play against Kearsney‚ on Botha's Hill‚ west of Durban.

According to paramedics‚ the bus ploughed through the centre median of the N3 coming down Town Hill towards Pietermaritzburg en route to Durban. The bus drove into oncoming traffic before it overturned and skidded to halt on its side.

Witherspoon said the school’s chaplain and guidance counsellor‚ as well the rector‚ had rushed to the various hospitals where the pupils were being treated.

Paramedics and emergency service personnel were on Tuesday afternoon attending to a bus accident on the N3 near Hilton in which scores of pupils are ...
News
4 years ago

“At this stage we do not know much more. We are trying to make head and tail of what has happened‚” he said. “There are one or two boys and staff in surgery currently and we are obviously thinking about them right now.”

Transport department spokesperson Kwanele Ncalane said that their specialised public transport unit had been dispatched to the scene.

“Our investigators are on the scene conducting their preliminary investigation in an effort to find out what caused the accident. The road has been closed to traffic while this is done. We are trying to open the road as soon as possible‚” he added.

According to a statement issued by Maharaj Coaches‚ the company hired by the school‚ this was the first accident of its kind during “the long association with various colleges in the area”.

“We hereby convey our heartfelt condolences to the family of the student who tragically lost his life and our best wishes for a speedy recovery to those students who were injured in the accident. We can give the public‚ the affected children and their parents the assurance that we will continue to provide the support to them until they have fully recovered.

"In so far as the vehicle and driver involved in the accident is concerned‚ we can give you‚ the public‚ the assurance that the vehicle was well maintained and the driver highly experienced‚” the statement read.