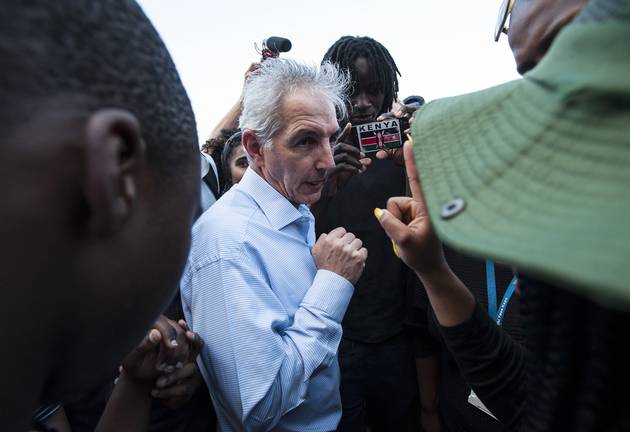 University of Cape Town (UCT) vice-chancellor Max Price says a planned shutdown of the university could cost the institution as much as R500-million.

Speaking to TimesLIVE ahead of a mass meeting organised by Fees Must Fall activists on Wednesday afternoon‚ Price vowed that the university would expel students who disrupt academic activity during a shutdown planned for Thursday.

A student activist who wants to remain anonymous for fear of “victimisation by the university” said that Price was using “intimidation tactics” by deploying private security on campus ahead of the shutdown.

The Fees Must Fall movement has announced that there will be a complete campus shutdown at the University of Cape Town on Wednesday in protest ...
News
4 years ago

“That already says that they’re going to assault us while we try to peacefully protest‚” she said. “(The protest) will only be effective if there is a shutdown."

She said that they had make “sacrifices” for the university to become “decolonised”. They are also concerned about the lack of black teaching staff.

“All we are learning about is white people and we are not learning about ourselves. Obviously we want that to change and we need to make sacrifices along the way‚ no one said the struggle was going to be easy‚” she said.

In a strongly worded e-mail to UCT management SRC representative Lethabo Maunye said he was “angry and disgusted” at their decision to deploy private security on campus during the potential shutdown.

Maunye claims he was assaulted on numerous occasions by private security and claimed that others were “beaten‚ sexually assaulted and some raped.”

President Jacob Zuma has received the final report of a commission established to look into scrapping university tuition fees.
Politics
4 years ago

In a veiled threat Maunye asked whether the management council would have acted differently if had they had ended up in a hospital after being beaten.

“That can be arranged if it is to educate you on why private security has no place on campus‚” the e-mail continues. During a mass meeting on Monday Fees Must Fall leaders called for protest over the alleged exploitation of in-sourced workers‚ as well as the financial and academic exploitation of students with historic debt.

Since the Fees Must Fall and Rhodes Must Fall movements started in 2015 the university has not taken disciplinary action against students who disrupted classes.

But Price said the university's response would be different if Wednesday's planned shutdown should continue.

Fees Must Fall protesters disrupted several exams at the University of the Western Cape on Monday. The students are protesting against the alleged ...
News
4 years ago

“One key difference is that we can’t afford to stop the academic year‚ we don’t have the flexibility that we’ve had in previous years.

“The risk is that people who are already financially disadvantaged are potentially more disadvantaged in that situation‚” said Price.

“Secondly‚ we think we’ve acted with enormous good will since the last set of protests. We’ve had an agreement which was signed and which we’ve stuck to.”

He said they were investigating a complaint that 23 students were being financially excluded but added that they found “enormous amounts of money” to address ''the needs of hundreds and hundreds of students over the last year‚” including students with historic debt.

Price said that over the past ten months UCT had worked with a student-led steering committee to address numerous issues.

“I think what’s different is that we believe that we - and I think most of our student interlocutors - have acted with good faith and that’s why we’ve had peace for the last ten months‚” said Price.

He was surprised at the sudden unhappiness among students.