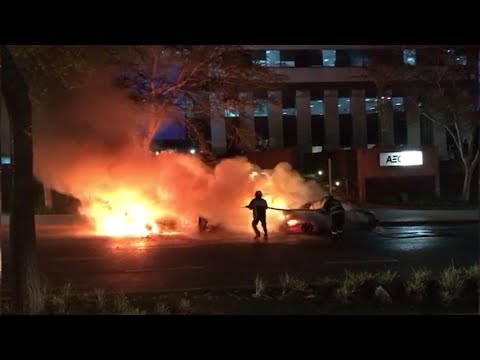 A gang of men descended on two Uber drivers in Sandton‚ Johannesburg‚ on Thursday evening‚ petrol-bombing their cars and firing shots‚ in what appeared to be part of the ongoing dispute between Uber and meter taxi drivers.

The drivers managed to escape but the cars were engulfed by flames.

The Times reporter Graeme Hosken was on the scene minutes after the Uber cars were set ablaze and reported that multiple gunshots were fired.

One Uber driver affected was too shocked to speak.

Another said: “They didn’t say anything. They just pulled him out of the car‚ they were carrying guns‚ and then they burned the car. He ran for his safety.”

The other Uber driver said around 15 armed men swarmed the cars.

“They just opened the door…put the petrol bomb and burned it up [at the ]same time. The second car - same thing‚” he said.

An eyewitness‚ who did not wish to be named‚ said the Uber drivers managed to escape the burning cars.

“They ran away. They also tried to open the door for the other driver. It was meter taxi guys‚” the witness said.

Fire fighters arrived within minutes to extinguish the blaze. Medics on the scene indicated no one had sustained serious injuries.

The police were not aware of the incident when contacted by The Times.

At the centre of the ongoing dispute between Uber and meter taxi drivers is Uber’s lower prices‚ which has made a significant dent in the meter taxi business.