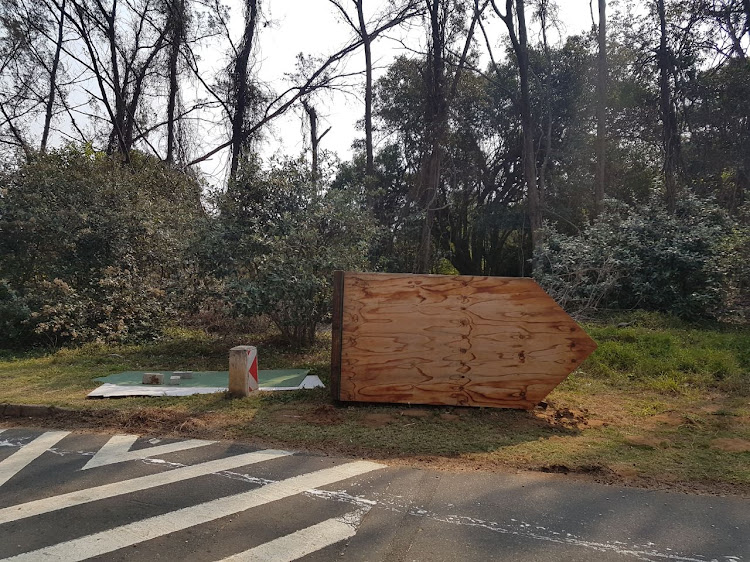 An Umdloti man was so peeved by a new security checkpoint in the KwaZulu-Natal north coast town that he tied the guard hut to his vehicle and dragged it for a few hundred metres in his fit of anger.

The man‚ whose identity is being withheld by police‚ is facing a charge of malicious damage to property after damaging the R10‚000 hut‚ installed by a local security company.

His antics on Saturday night were captured the CCTV of a complex on Bellamont Road.

“It’s just a hut for the guard to sit in and at night they put cones to regulate who comes and goes. We’ve had a huge spate of burglaries‚ which we managed to bring down with SAPS and the policing forum.

“But we still have to sort out armed robberies and vehicle theft‚ and that you need to control access for.

“The cones are just there to slow people down so that we can see who is in the car‚” said Herbst.

She believes the man became agitated because of the checkpoint near his home.

“The guard had stepped out to check the vehicle.. This guy got annoyed and drove over the cones. He drove a short distance‚ turned around and came back.

“On the video he reverses to the hut. Ties a chain to it. Get’s back into his car and drives off a few hundred metres down the road‚ dragging it behind him‚” said Herbst.

Police spokesman Lieutenant-Colonel Thulani Zwane said: “A case of malicious damage to property is being investigated by Durban North SAPS after the security hut was damaged on 9 September 2017. “No arrests have been made and investigations are continuing‚” he said.