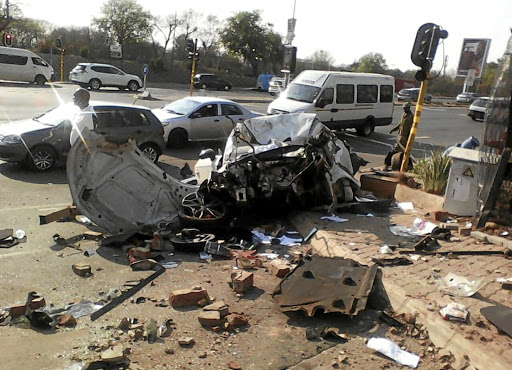 The woman occupant of this car survived.
Image: News.searchessa

Paramedics are astounded that a young woman survived a horrific crash on Rivonia Road, in Sandton, northern Johannesburg, early on Sunday morning.

CCTV footage of the crash surfaced on social media yesterday. It shows the powerful Audi TT colliding with an unknown object, flying up into the air before smashing into a brick wall and flipping over.

Photographs posted online show the extent of the damage to the car.

The driver is in her early 20s and is believed to be in a critical condition in hospital after being found outside the vehicle by paramedics.

It is not clear how she got out of the mangled wreckage and conflicting reports about her condition are circulating online.

"Paramedics found a wrecked performance vehicle lying next to a wall. The woman was found lying a short distance behind the vehicle.

"Paramedics assessed the woman and found that she had sustained numerous injuries and was in a critical condition."

They stabilised her before transporting her to Charlotte Maxeke Hospital.

The police are still investigating the cause of the crash.

A motorist's attempt to flee the scene of an accident on the N1 near Centurion was thwarted when several drivers gave chase.
News
4 years ago

A gang of men descended on two Uber drivers in Sandton‚ Johannesburg‚ on Thursday evening‚ petrol-bombing their cars and firing shots‚ in what ...
News
4 years ago

A woman made a daring escape when she slipped out of her handcuffs and stole a police cruiser, leading officers on a high speed chase caught on ...
News
4 years ago