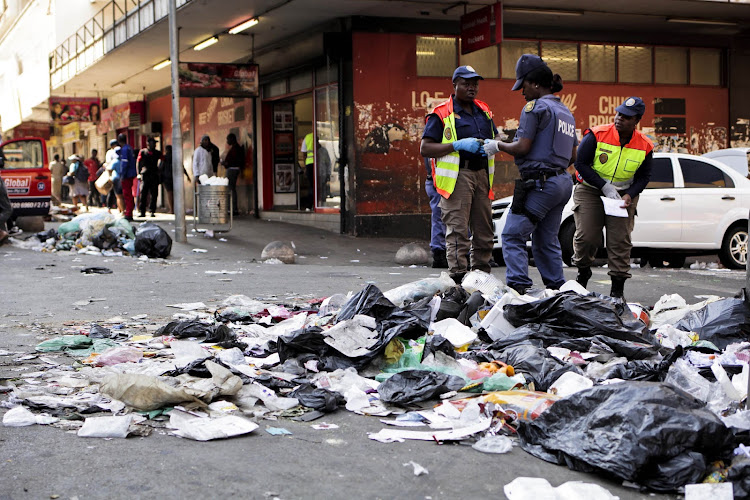 Hillbrow has become a pigstile as refuse collection is not being done. Residents say this has been going on for weeks. Some of the streets that have become a filth include Pretorius, Esselen, Twist, Quarters and Claim.
Image: Mpumelelo Buthelezi

Just as the City of Johannesburg officially announced that power has been restored in the City Centre‚ it now faces another problem with a group of people trashing the street in retaliation of a contract that ended months ago.

On Thursday‚ TimesLIVE did a walkabout in Hillbrow and the place was a mess.

Corner spots were full of trash and the garbage was mounting up on the side of streets such as Esselen‚ Pretorius‚ Claim and Twist.

Residents explained how things had been unfolding over the past few days.

“The workers come everyday to clean the streets. They collect the garbage‚ sweep the streets and place it in the corner. But some people are always coming here and scattering it all over the place. We don’t know why they are doing this‚” said one of the residents.

Some of the business owners complained that the filth was making it difficult to trade in the area.

“It’s bad. It is stinking. How are we supposed to work in a place like this‚” said one business owner.

Hawkers selling in the streets of Hillbrow were serious affected as some have to sell food next to a pile of garbage.

“Since the first of September we have people that have been trashing the street … They also have been hijacking trucks to dumb all the waste in the Hillbrow area‚" Venter said.

“Yesterday [Wednesday] we had a meeting with the executive mayor and he has confirmed that JMPD and the SAPS will be assisting us. Since last night our people and trucks have been escorted when cleaning the city.

“Today we focused on cleaning Joubert Park and this afternoon we will go back to Hillbrow to clean. This has nothing to do with the unions or anyone. These are people who were employed on a three month contract. Their contract came to an end at the end of February now they demand jobs from Pikitup."

Venter said there were about 300 people who were part of the elapsed contract but now about 100 were trashing the city.

“We have two trucks. You can’t make this truck sit and wait for every bag which will be thrown in. Only when a street has been done [by the cleaners] we can send the truck‚” said Venter.