Out for blood: Shocking images show wounded teen collapsing after a cop fired at him using rubber bullets 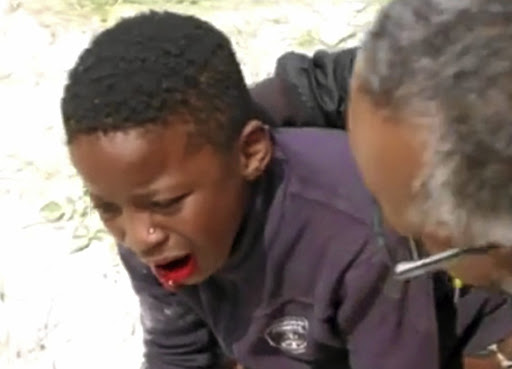 BLOOD AND TEARS Ona Dubula, 14, collapses in the street after being shot in Hout Bay
Image: Peter Michaels and Fidel Meter

Pinky Dubula uses toilet paper to wipe the blood from her 14-year-old son's mouth as he lies in a Cape Town hospital bed.

Her heart is broken but she refuses to reveal her anguish to Ona, who had surgery on Wednesday to remove a police rubber bullet from his mouth and ended up in intensive care.

A policeman shot the teenager at least four times at point-blank range during protests in Hout Bay on Tuesday - twice in the ribs and twice in the mouth - and doctors at Groote Schuur Hospital told Dubula his speech would probably be permanently impaired.

It was another cruel blow for the 34-year-old unemployed, single mother who lost her home and everything she and her five children owned in March when fire razed thousands of shacks in Imizamo Yethu to the ground.

Several schools turned her away this year when she tried to enrol Ona, who was expelled from Grade 6 at his previous school for misbehaviour. This was why he was wandering the streets on Tuesday, and decided to investigate the commotion in Hangberg.

Now all she can do is wait at his bedside until he is well enough to go home to the shack she built two weeks ago. "How am I going to nurse him when we get home? Will I have to carry him to the toilet?" she said. "I survive on a child grant. We don't have a toilet or a tap. We rely on neighbours."

Not even a single police officer has come to visit me and my son. I am on my own.

She collapsed on Tuesday after hearing the news of Ona's shooting. "I woke up about 30 minutes later and went to my sister's place, where I collapsed again. She helped me to the fire station, where Ona was waiting for an ambulance. I accompanied him [to hospital]. I have been here since. I haven't bathed, I don't even have money for transport to get back home."

As Dubula waited for Ona to be wheeled out of surgery she was haunted by memories of Andries Tatane, who was killed by a police rubber bullet in 2011 during a service-delivery protest in the Free State town of Ficksburg.

"Police cannot be pumping bullets into children in this day and age," she said.

"The images of the Andries Tatane incident raced through my mind when I laid my eyes on my son lying helplessly. This is the second time someone in our community has ended up in hospital because of police brutality.

"Not even a single police office or government official has come to visit me and my son. I am on my own."

A history of violence: Police action in Hout Bay

Fourteen-year-old Ona Dubula‚ who was shot in the face at close range by police while he hid behind a table during a protest in Hout Bay on Tuesday‚ ...
News
4 years ago

Dubula, whose name means "shoot" in Xhosa, said journalists had shown her a video of her son's shooting, which happened as he hid behind an overturned table with two women in the middle of the street.

In the footage, Ona staggers to the roadside after being shot and a police officer approaches him, screaming: "What are you doing here?" before grabbing his arm and bellowing to fellow officers to "take down the barricade".

After the officer lets him go the boy falls to his knees. He struggles to get up, stumbles and falls again, spitting blood.

An unknown man demands: "Is anyone helping this guy?" as police file past. "Jesus Christ, he needs medical attention.

"Where the f*** are the paramedics, guys? Are you out of your f***ing minds?" someone else screams at the police. Seconds before the footage ends, a man kneels beside Ona and puts his arm around his shoulders.

Rubber bullets broke his ribs and smashed his tongue.
News
4 years ago

Independent Police Investigative Directorate spokesman Moses Dlamini confirmed the watchdog would investigate a case of attempted murder against the policeman who shot Ona. "We will be interviewing the victim and his mother [on Thursday]," he said.

Police Ministry spokesman Siyabulela Tom said Deputy Police Minister Bongani Mkongi planned to visit the Dubula family on Thursday. "We definitely have to make contact [with the child] because what we witnessed was quite disturbing, that police brutality," he said.

After viewing the video, Gareth Newham of the Institute for Security Studies told The Times: "There is no acceptable reason for that police officer to shoot at that boy. The boy does not appear to be posing any discernible threat to the officer. What can be seen in the video suggests a severe breach of the law and regulations governing public order policing."

A crayfisherman told The Times this week the protests were "about everything".

"We just want service delivery," Alexander Plaatjies said. The initial protests were about fishing quotas, but community members also complained about the encroachment of new housing developments on their land and the closure of a factory in the area.

"These protests are about everything; all the problems are being highlighted in these protests," said Plaatjies.