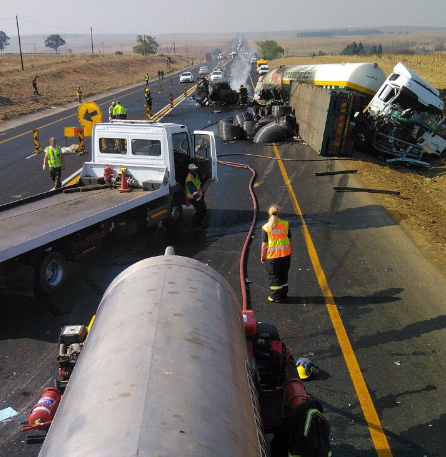 Accident on the N3 between Harrismith and Villiers
Image: Supplied

The main route between Johannesburg and Durban is expected to be closed for "a couple of hours" after an early-morning accident between two trucks and four cars.

One of the trucks involved in the accident - which took place on the N3 highway between Warden and Harrismith - was transporting liquid oxygen and caught alight in the collision. The accident took place at about 7am and the fire was still burning two hours later.

Con Roux of the N3 Toll Concession said the fire was in the process of being extinguished‚ and that all emergency personnel were on the scene.

"They do reckon it'll still be a couple of hours before they reopen the road. Unfortunately‚ the entire road is closed. The main reason is the fire‚" he said.

"At the moment‚ I'm not aware of any fatalities‚ but one driver is still missing."

One of the drivers of the truck had to be extricated by paramedics‚ but he had not sustained serious injuries.

Roux said while the exact cause of the accident was not known‚ "very thick mist in the vicinity" was a strong factor.

"We're making a call to all motorists‚ when there is poor visibility‚ to reduce speed and increase the following distance. Many people don't do that and just drive as they normally would. That's often the reason for multi-vehicle accidents‚" said Roux.