Villages of the parched: Why are these places dry when there is no drought?

Despite several court orders, municipality drags its feet to ensure there are running taps 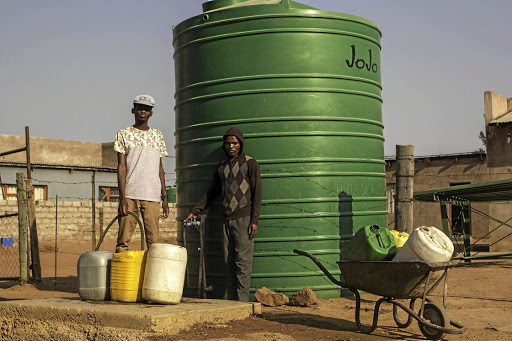 DAILY GRIND Josias Maphela, 18, and Limsoni Mbewe, 23, fill up for the weekend so that their families get enough water for bathing and cookingPicture Mpumelelo Buthelezi

Less than 10km from one of Limpopo's biggest dams, Flag Boshielo, the residents of several rural villages face a daily battle to get water.

In the dry, arid heat and dust, pupils, grandmothers and teachers can only pray that today the taps will splutter and cough out enough water to bath and cook.

On the days the taps remain silent, most will make a backbreaking journey to a central water tank - pushing wheelbarrows full of buckets. That is if the men and women responsible for ensuring these tanks remain full honour their promises.

But many residents say it is hit-and-miss. Sometimes the tanker trucks come; sometimes they are seen only once a week.

The Times visited villages in and around Elandskraal, 35km from Marble Hall, after learning of three court orders issued by the Pretoria High Court to compel the Sekhukhune District Municipality to provide one of the most basic constitutional rights - water.

The court was first asked to intervene in 2015 and since then lawyers from the Wits Centre of Applied Law Studies have returned twice to amend the orders to try to force the municipality to deliver more JoJo tanks and to send water trucks on a more regular basis to the villages of Elandskraal, Morarela, Dichoeung, Tsansabela and Mbuzini.

It seems earnest attempts were made to adhere to these orders, but spending time in Elandskraal and Mbuzini on Friday, The Times did not find any resident who was happy with the efforts.

On Tuesday last week Judge Hans Fabricius, who has overseen the case since inception, called the lack of a sustainable solution for these villagers "disgraceful".

As the orders were not being adhered to, advocates on behalf of the Boshielo West Concerned Residents brought an application for contempt of court on Thursday, hoping Judge Fabricius would hand down a suspended sentence.

Instead, he asked for Minister of Water Affairs Nomvula Mokonyane - who has been cited as a respondent in court papers for two years - to respond and to tell the court what steps she has taken to rectify the situation.

"During apartheid we always had water," said one resident.

"Those villages," he said, pointing in the direction of the dam, "they always have water, forever. Maybe it's because the important people live there." 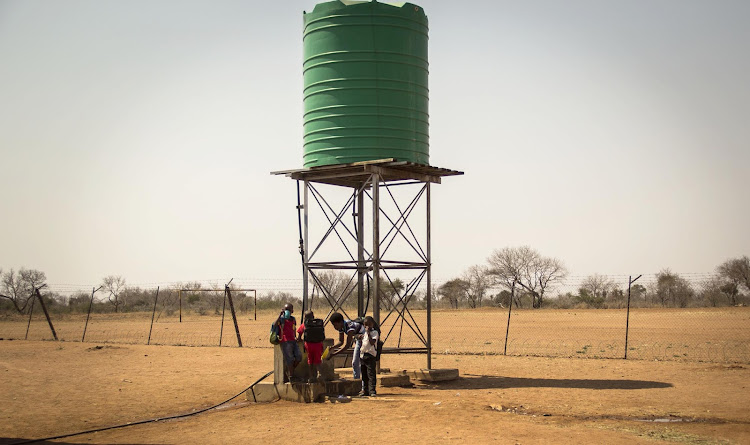 School children from Immerpan Primary School are having a water break under a Jojo water tank on a friday afternoon, during lunch time.
Image: Mpumelelo Buthelezi

The villages he is speaking of are less than 20km from Elandskraal.

In 2009 the Sekhukhune district broke down the existing water treatment plant at Boshielo Dam and built a new facility on the banks of the Olifants River that feeds the dam.

"Before the new plant, the water was fine. The taps worked," the resident said.

In court papers it is revealed that between 1986 and 2004 there was an uninterrupted water supply to all the villages.

In responding court papers Sekhukhune District municipal manager Norah Maseko blamed the lack of compliance on a "misunderstanding" with the water service provider and a lack of trucks.

She said the municipality faced various problems and said it "dawned on the depot manager only during the consultation with legal officials in preparation for this affidavit that it was possible for the municipality to provide the applicants with reticulated water as per the court order on Wednesdays and Saturdays." 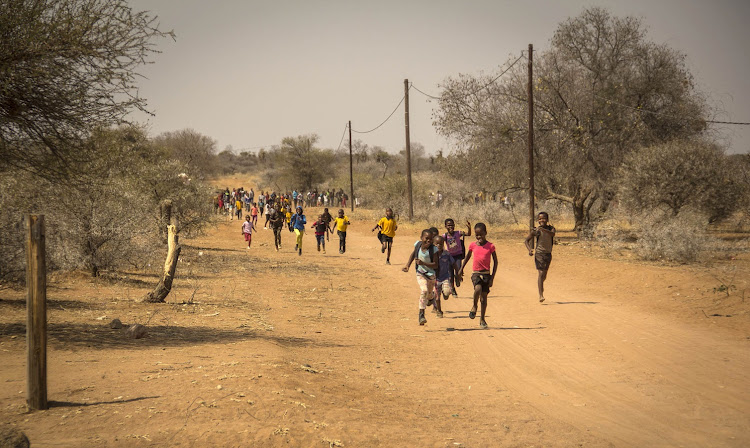 Learners from Immerpan Primary School on their way back home on a Friday Afternoon, are excited that school is out.
Image: Mpumelelo Buthelezi

'It is a struggle. A genuine struggle'

Pensioner Lina Malapane, 73, lives with her family of seven in Elandskraal, Limpopo, on the property she has occupied since 1986.

"Since the beginning of year, we get water on a Monday. There is a communal tank from which everyone must fetch water. And the hill is steep coming back home.

"It is a struggle. A genuine struggle so I wait until I really need the water before I go."

Four children in the home are still in school and Malapane said water is rationed to family members to drink and bath.

"I love my place, I will die here. All I am looking for is water - without water you can have all the groceries in the world but do nothing with it."

Twenty kilometres west of Malapane's home is Immerpan Primary School in the village of Mbuzini, a school of 350 pupils that has only a single borehole to supply water.

When The Times arrived at the school just before noon, the heat and dust were choking.

In one corner of the grounds is a small vegetable patch with spinach and tomato plants withering and dying. A makeshift irrigation system of buckets and plastic pipes seems in vain. 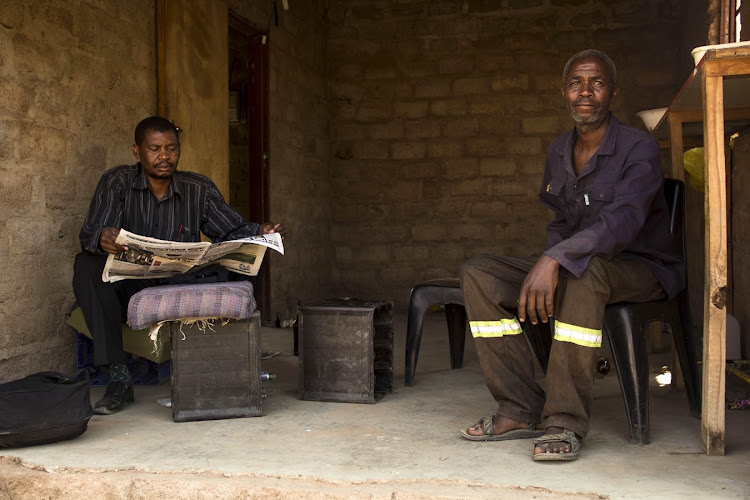 Maphala Micheal Phosa and his lovely friend named Robin Chauke,have not been having access to water since 4 days due to water shortage in their area called Elandskraal, Limpopo.
Image: Mpumelelo Buthelezi

Water from the borehole is extremely salty.

Teacher Freddy Phefadi said: "Some pupils do not come to school when they do not have water to bath because the other pupils will tease them if they come to school dirty. Academic results have worsened because of the lack of nutrition - the food is useless without clean water."

Phefadi said the department of education used to fill the three JoJo tanks on the premises with fresh water but this had stopped.

The tanks in the village are also intermittently supplied by the municipality, but the school cannot take enough water from the village tanks to supply the school.

Phefadi said young children had been taken by crocodiles when sent to the river to collect water.

In better times vegetables grown here fed the children - some of whom eat only once a day at school. 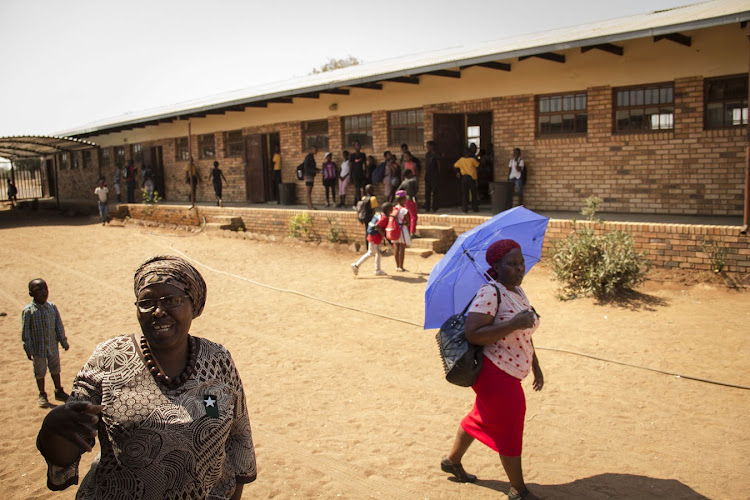 The average water level of dams across the Western Cape is 35.2%‚ a significant drop from the levels measured last year.
News
4 years ago

No more free jugs of water at Cape Town restaurants?

Ordering a big jug of water with ice and lemon for the table might be a thing of the past for Cape Town’s restaurant-goers with level 5 water ...
Lifestyle
4 years ago