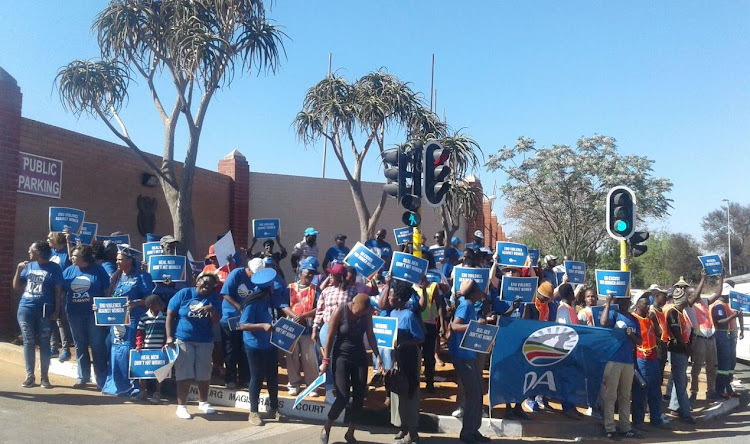 Anti-Mduduzi Manana protesters at the Randburg Magistrates Court. Manana is expected to plead guilty to the charges brought against him by Mandisa Duma, one of the victims he assaulted at Cubanna.File Photo
Image: Neo Goba

Cyril Madonsela and Thulani Mdaka on Wednesday briefly appeared in the Randburg Magistrate's Court‚ where they face three counts of assault with intent to do grievous bodily harm.

The duo‚ both clad in blue jeans‚ white shirts‚ black coats and black shoes‚ were arrested by warrant officer Clifford Minnaar on September 13 in court after one of the victims identified them as they had come to support Manana during his second appearance.

In a video that went viral‚ three men can be seen dragging one of the women‚ Mandisa Duma‚ down as she tries to get up while bouncers can be seen standing by and not intervening in the 14-second video clip. Duma can be heard asking the men four times: "What are you doing?" before the video cuts.

The two other women - Noluthando Mahlanga and Thina Mopipa - also opened a case at the Douglasdale police station against Manana‚ Mdaka and Madonsela after they were assaulted at Cubana restaurant in Cedar Square‚ Fourways.

On August 6‚ Manana lost his cool after an argument on who should succeed President Jacob Zuma at the party's elective conference in December. This allegedly triggered Manana to attack the women after one of them made a comment about his sexuality‚ labelling him gay.

The case has been postponed to October 5 while Manana will appear for the third time on November 7.

Former deputy minister of higher education and training Mduduzi Manana, who was accused of assaulting three women, has pleaded guilty to all the ...
Politics
4 years ago

Mduduzi Manana pleads guilty to all three counts of assault

Former deputy minister of higher education and training Mduduzi Manana‚ who was accused of assaulting three women‚ has pleaded guilty to all three ...
Politics
4 years ago