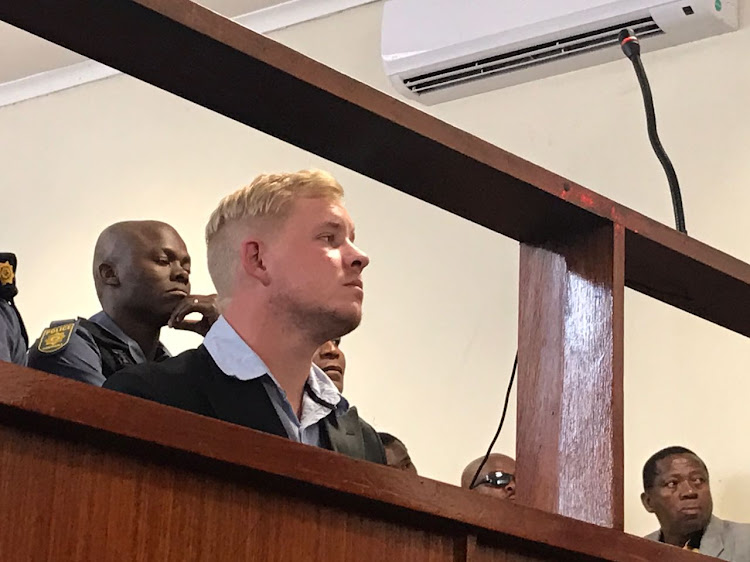 Matthew Benson appeared in the Brits Magistrate's Court. He was initially arrested on an attempted murder charge following the disappearance of Tebogo Ndlovu. Police have now added a charge or murder.
Image: Bafana Nzimande

A police officer has confirmed that a blood stain found on a Mooinooi farm matches that of missing 24-year-old Tebogo Ndlovu.

Colonel Isaac Tlhapi was testifying in the bail application proceedings of Matthew Benson‚ a 24-year-old who is facing a charge of attempted murder in the Brits Magistrate’s Court in the North West.

Benson will now also face a charge of murder‚ the court heard‚ as a result of the evidence collected so far.

Ndlovu has not been seen since August 2‚ when he and two friends were allegedly shot at on a farm in the Majakaneng area.

The three‚ who live in the neighbouring Majakaneng settlement‚ were allegedly stealing oranges on the farm when someone allegedly shot at them. Now police believe Benson to be the shooter.

Tlhapi told the court that blood found on the farm was compared to that of Martha Ndlovu‚ Tebogo’s mother.

Blood tests showed that the blood matched Martha’s‚ meaning it was probably her son’s blood.

The officer further told the court that four firearms owned by Benson’s father were collected from the farm and sent for ballistic tests after the incident was reported to the police.

A 9mm pistol tested positive when matched with three cartridges found at the crime scene.

Speaking through his attorney‚ Jeff Moyo‚ Benson said he intends pleading not guilty to the charges.

Moyo explained to the court that the cartridges could have come from the shooting range located on the farm.

He indicated that people often shot at rabbits and monkeys on the farm‚ a statement which caused some commotion in the public gallery.

Tlhapi said: “I’ve had a long interview with the accused and he indicated that he does not own a firearm. He told me that he did not fire a shot on the day in question but I have also met a witness in the neighbouring farm who indicated to me that he received a call from the accused telling him that he has seen criminals in the yard and he must come assist him.

“The neighbour stated clearly that on his arrival he found the accused being in possession of a 9mm pistol.”

More arrests are expected as Ndlovu’s friends told police that they saw a group of men and a bakkie parked where they left their friend after the alleged shooting.

“Human blood stains were found on a vehicle used by the accused. The blood was found on the passenger seat window winder‚ which indicates to us that there was another person who assisted Benson in removing the body‚” Tlhapi told the court.

The prosecution are opposing Benson’s bail application‚ arguing that more than 20 cases of damage to property have been reported to police since Ndlovu’s disappearance.

This is as a result of people’s anger over the perceived slow pace of the investigation.

The case has been postponed to 27 September and Benson will remain in custody.

Racial tension showed its ugly side prior to court proceedings‚ when a heated argument broke out between Majakaneng residents who came to support the Ndlovu family and those there for the accused.

The argument was caused by the limited number of seats in the gallery.

Benson's family arrived first in court and reserved a few spaces on the bench for close friends and family that were still outside court.

A large group from Majakaneng arrived later and wanted to take up the empty spaces‚ but those already seated indicated that they were reserved.

Heated argument breaks out at Brits Magistrate's Court as people contest who should sit in the gallery. #Majakaneng #TebogoNdlovu pic.twitter.com/EY5cdvju5R

Racial slurs and insults followed from both sides.

Court officials intervened and members of the tactical response team were called to help ease the situation.

Majakaneng residents demonstrated outside court before being bussed away after proceedings.

Ndlovu has not been found.