Babe‚ the little pig who wasn’t ready to go to market‚ may have found a new home - and one where she won't be on the menu.

After jumping from a truck on the way to the slaughterhouse earlier this month‚ rescued by a vegan activist who just happened to be "at the right place at the right time"‚ the hog has captured the hearts of South Africans.

Vegans and non-vegans alike have raised more than R3‚500 for Babe before she was released from the Society for the Prevention of Cruelty to Animals (SPCA) in Pietermaritzburg to her new home in Pretoria.

"A raffle has been put together by local vegans with small businesses around South Africa and all funds will go to Babe's transport‚ vet care and food at her new home‚ which will likely be Asher's Farm Sanctuary‚" Anonymous for the Voiceless organiser Tara Aberdeen said.

The organisation aims to create awareness about the plight of factory farm animals and encourages a vegan lifestyle.

"It was pure coincidence that one of our fellow vegan activists happened to be travelling behind that truck likely destined for slaughter when Babe jumped off‚" Aberdeen said.

Pietermaritzburg photographer and vegan advocate‚ Rekash Sinanin‚ was travelling on the N3 when the pig leapt off a truck and dodged vehicles on the freeway.

Sinanin stopped his vehicle and dashed after the animal.

"I managed to catch her before she was knocked and put her in my backseat‚" Sinanin said in a video posted online.

He transported the pig‚ whom he named Babe‚ to the SPCA‚ where she was treated for bruises and trauma. 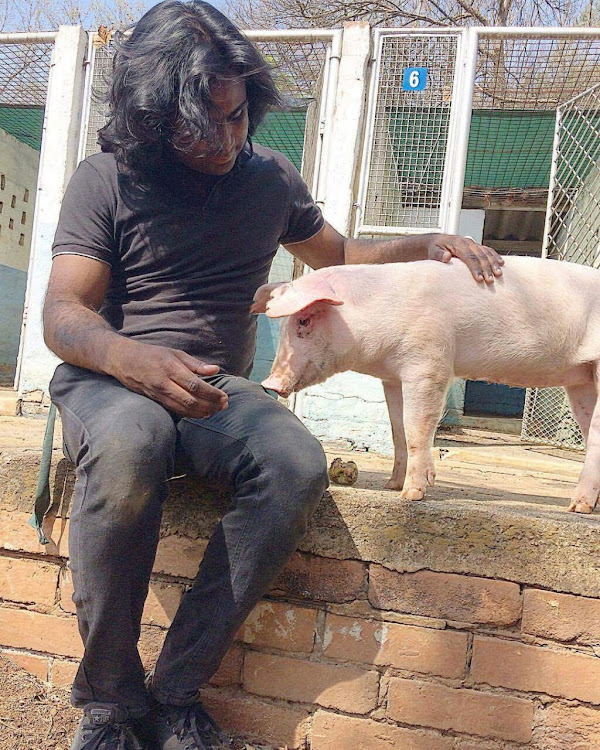 Babe the pig and her rescuer, Rekash Sinanin.
Image: SUPPLIED