A rescue dive operation to recover bodies after a car crash at a dam near KwaMaphumulo.
Image: Police Search and Rescue

The sound of rushing water and screams are likely to have filled the final moments for seven people who drowned when a car plunged into a dam in the northern reaches of KwaZulu-Natal on Sunday.

The youngest of the casualties was a 10-month-old baby‚ found submerged in the wreckage which had settled on the dam floor.

Police Search and Rescue Unit divers had the grim task of pulling the boy’s body to the surface‚ along with six other members of his family.

It is understood that the car had been travelling down a district dirt road‚ set into the hillside‚ when the driver lost control. 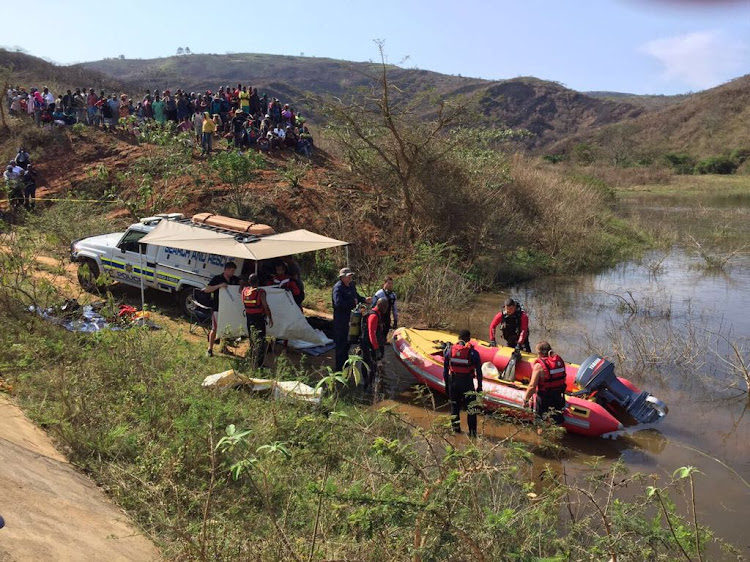 A rescue operation to recover bodies after a car crash at a dam near KwaMaphumulo.
Image: Police Search and Rescue Unit

From evidence gathered at the scene‚ the wheels of the car clipped the curb of the road which runs over a dam‚ causing it to flip into the water.

Divers first recovered the body of a woman from the water‚ the only occupant who was able to clamber from the car. Over a matter of hours‚ the bodies of a man‚ a three-year-old girl‚ two children aged 14 and 17‚ a 34-year-old woman and the baby.

Police divers and rescue technicians from IPSS Medical Rescue began efforts to recover the wreckage from the water.

A rescue dive operation to recover bodies after a car crash at a dam near KwaMaphumulo is expected to continue for most of Sunday afternoon.
News
4 years ago

Three people were killed on Saturday morning when a truck crashed into the side of a light motor vehicle at the N12 and R50 split in Delmas in ...
News
4 years ago

10 victims of Balfour crash identified after burning beyond recognition

Authorities have identified the bodies of 10 people who were burnt beyond recognition in a horrific crash near Balfour two weeks ago.
News
4 years ago