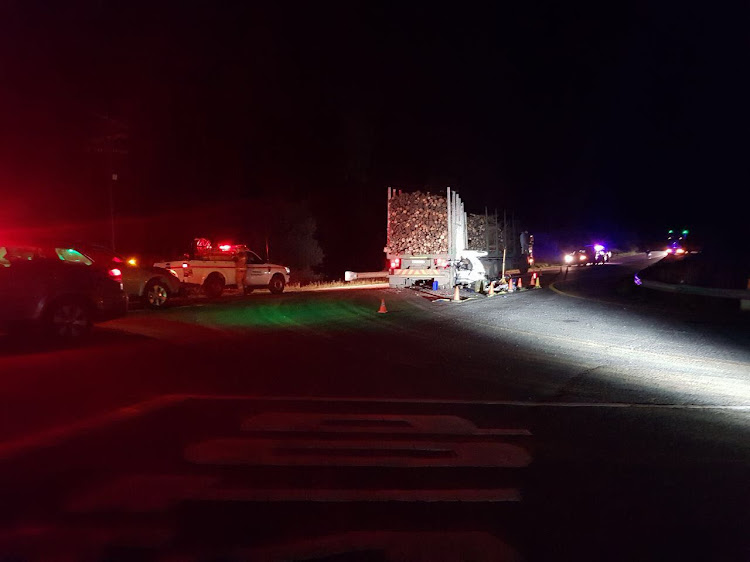 The wreckage of a car lies wedged beneath a timber truck on the R617 near Underberg. Seven people were killed in the accident.
Image: Brett Deavin/Berg Protection Services

Seven people were killed and a 9-year-old girl was critically injured when a car collided with a timber truck on the R617 near Underberg in the KZN Midlands on Sunday night.

“From what we found at the scene the timber truck had pulled onto the R617 from Coleford Road. The car had obviously not seen the trailer of the truck at night‚” he said.

“There were five adults in the car and three children. The adults are employees from the local Spar. The car hit the trailer of the truck at full clip. Seven people‚ including two children‚ died at the scene‚” he added.

KZN EMS spokesman Robert McKenzie said that the surviving child was treated and stabilised at the scene and then rushed to the St Apolinaris state hospital for further urgent care.

A seven-month-old baby girl miraculously survived a horrific highway crash in Johannesburg which claimed the lives of five adults and a child on ...
News
4 years ago

One person killed in helicopter crash outside Cape Town

A helicopter crashed near a high school in Somerset West approximately 50km from Cape Town just after noon on Thursday.
News
4 years ago

The sound of rushing water and screams are likely to have filled the final moments for seven people who drowned when a car plunged into a dam in the ...
News
4 years ago

A rescue dive operation to recover bodies after a car crash at a dam near KwaMaphumulo is expected to continue for most of Sunday afternoon.
News
4 years ago