Geology honours graduate Glen will persist until he finds a job 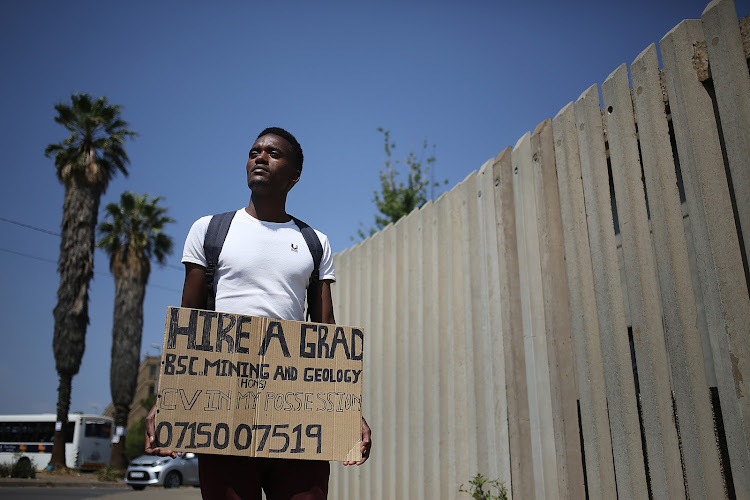 Braamfontein, Johannesburg. Mashau Glen Ndouvhada, POSES for a picture holding a cardboard box. He claims to have a B.S.C in Mining and Geology and is looking for employment .
Image: ALON SKUY/THE TIMES

Geology honours graduate Glen Mashau Ndouvhada from Limpopo has been looking for a job for a year - driving to Rustenburg mines‚ handing out his CV and using every recruitment company he can find.

On Wednesday‚ he decided to stand near KPMG's offices in busy Johannesburg with a poster asking for work and advertising his qualifications.

Ndouvhada said he graduated with an honours degree in geology and mining at the University of Venda last year. He is determined to get a job. "I am growing up. I am 25 in December."

But "all the emails he gets back from recruiters are the same‚ saying there are no jobs at the moment"‚ he explained.

It is important that our regulatory environment remains clear, competitive and consistent, writes Paul Dunne
Business Times
4 years ago

He studied mining as he believed it would bring a good career path‚ with opportunities for advancement and a competitive salary. "I love mining actually." He was told growing up that mining is a career you can "grow in and you can get more money".

Before coming to Johannesburg‚ he went twice to Rustenburg‚ to the mines.

He told security guards at the heavily secured mines he had appointments with the managers to convince them to let him in. "I couldn’t go there and come back without talking to them [managers]." The mining managers all told him: "There is nothing [any]more. If something comes up‚ I will contact you."

He has been in person to recruitment companies in Johannesburg to hand over his CV. "I apply online to every single job but nothing happened." He lists the websites that he uploaded his CV to‚ including major banks and recruitment sites.

His friend who works at a bank invited him to stay in Johannesburg and look for a job. He plans to stand with his cardboard poster in different spots around Johannesburg.

After a year he keeps going‚ saying he cannot give up.

A golden past, a black future

Once the gold-mining heart of Gauteng, Merafong City faces an economic meltdown as Eskom threatens to cut off the municipality's electricity supply ...
News
4 years ago

Between standing in the hot sun‚ he said‚ he would "sit down and pray" in the shade.
He has a 4-year-old son and parents to support. His dad was retrenched in 2010 from job in a mall in Polokwane.

A member of a mining recruitment firm said geology graduates would struggle to find work in South Africa‚ as geologists explore areas for new mines and South Africa is not opening new mines. Most areas have been explored for minerals in South Africa.

The recruitment company places most people in other countries on the continent: "Africa has so much untapped land."

South Africa's unemployment rate is 27%. There are more than 6 million unemployed people in the country.

Speaking at the Johannesburg Indaba on Wednesday‚ Chamber of Mines head Roger Baxter said the mining industry was now smaller than in 1994.