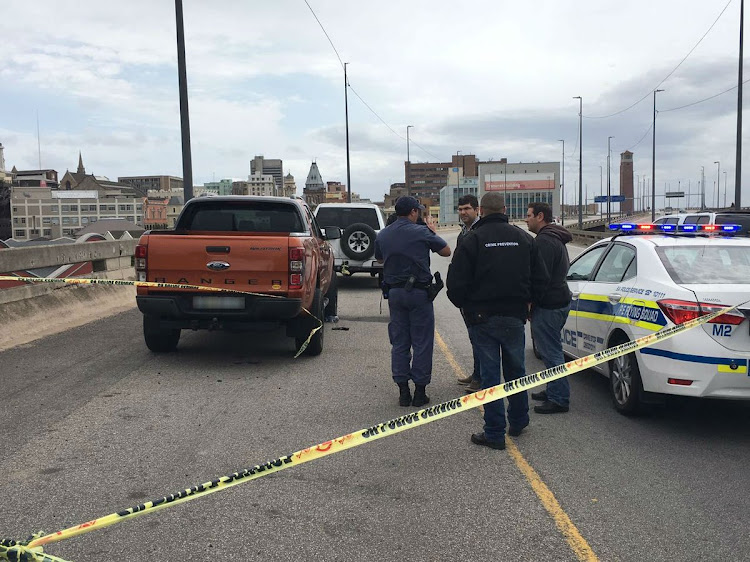 Police chased down the suspects in the shooting at NMU. Shots were fired during a student protest at university in Port Elizabeth.
Image: HeraldLIVE via Twitter

Shots were fired during a student protest at Nelson Mandela University (NMU) in Port Elizabeth on Wednesday morning. No one was injured.Police were on the scene‚ HeraldLIVE reported.

The shooting unfolded as students embarked on a second day of protesting following a violent attack on Monday night in which one student was raped and another stabbed.

A section close to the south campus boom gate was cordoned off with police tape after the shooting.

Further details about the shooting are still unclear.

A vehicle identified in the shooting has been chased down on Settlers Way near the Campanile. The suspects were arrested.

Not long after the shooting‚ students ended the protest pending more information from management.

Earlier on Wednesday‚ NMU said that operations at the university had not fully resumed due to ongoing student unhappiness.

The Nelson Mandela University says it will be beefing up security on its campuses following an alleged rape incident at its Second Avenue campus.
News
3 years ago

Port Elizabeth police have confirmed that they are searching for a man who is believed to be connected to a brutal attack on the Nelson Mandela ...
News
3 years ago

An armed man has raped one student and stabbed a second inside a computer laboratory at Nelson Mandela University in Port Elizabeth.
News
3 years ago
Next Article