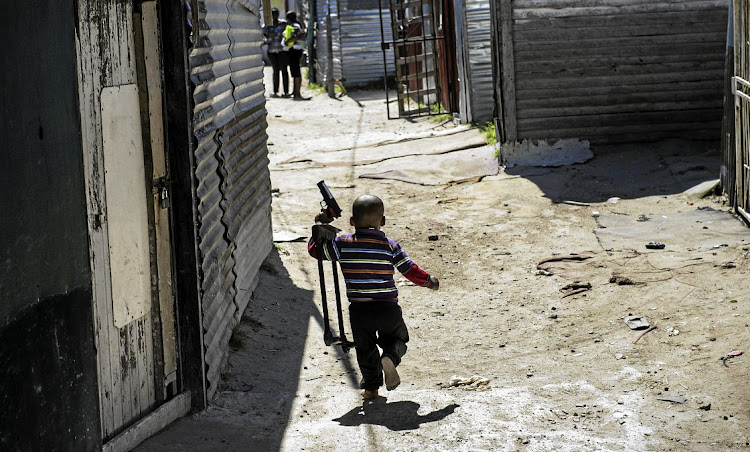 Lubabalo “Matshaya” Jokazi‚ 25‚ was one of 11 people who were shot dead in Philippi’s Marikana settlement at the weekend.

“We had just finished having supper when Matshaya told me that he was going to Emaweleni shebeen to play some pool with his friends. Emaweleni is not far from us‚ just about three or four houses away‚ and my son liked going there with his friends‚” Jokazi told GroundUp. “He left the house just after 6pm. It was a couple of minutes later that I heard a string of shots‚ so many that I don’t even know how many shots there were.”

She said she jumped up to close her door. Hearing gunshots in Marikana had become usual.

After shutting her door‚ she remembered that her son was out.

Police Minister Fikile Mbalula has brought in the SAPS from Gauteng to quell the violence plaguing Cape Town's Marikana settlement.
News
3 years ago

“I went outside telling myself that I would look for him. Then I heard more gunshots and ran inside the house again. But fearing for my son’s safety‚ I decided to be brave and went outside again. I saw a crowd of people running down the road‚” said Jokazi.

A few minutes later a woman from Emaweleni came to Jokazi’s house calling her name. Jokazi said the woman was hysterical‚ telling Jokazi that there had been shooting in her tavern and people were dead. “She asked me where my son was. I told her he had left for her place. I left her inside my house and I ran to the tavern‚” said Jokazi.

When she got there‚ a crowd of people were standing outside. She ran past them into the shebeen. She stood by the door and to her right in the corner lay her son‚ face down in blood. On top of him was one of his friends. Both of them had been shot‚ both of them were dead.

“I froze. On my left more bodies were scattered‚ some on chairs. I looked at my son‚ and I heard someone saying I should get closer and see if he was breathing. I did not move because I knew that he was gone‚” said Jokazi.

She went home and phoned her daughter who went to see her brother’s body and then ran to the police station.

Lubabalo was described by his mother as a loving son who loved cooking and who took care of his mother and sister. He was to have started a new job on Monday.

In a shack opposite Emaweleni‚ Vumile Laho‚ 27‚ and three friends also lay dead on Friday night. Laho’s aunt‚ Eunice Ndzima‚ said Laho’s mother had received a call at about 7pm on Friday from a cousin.

“My sister and I live in Worcester and Vumile was here in Cape Town after he found a job this side. The call came telling us that Vumile had been shot in his shack while with friends. A few guys had walked into the shack and opened fire.”

“We immediately started making our way here from Worcester and we arrived on Saturday when we received confirmation from people and police that he was among the 11 people killed that night‚” said Ndzima.

Laho’s mother tried to speak to GroundUp but broke down in tears.

“Vumile was a good child who always made people laugh. He always made sure he sent us money. We are so shocked by this‚” said Ndzima.

Neither family has made any funeral arrangements yet.

“There is no life in Marikana‚” said Jokazi‚ who has been living in the settlement since 2014. “We give thanks for just waking up in the morning and at night we ask the Lord to grant us another day.”

WATCH | 'We don’t know who is killing us': Marikana residents live in fear