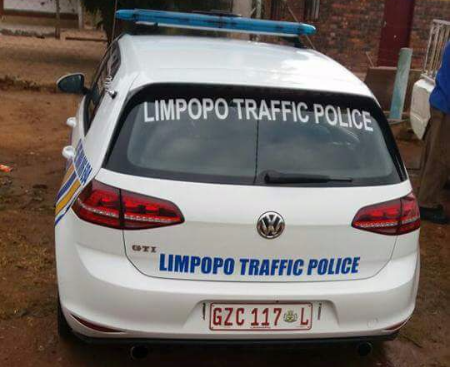 Hijackers have stolen this marked traffic police car from outside the home of a traffic officer in Limpopo.
Image: SAPS

Brazen hijackers are on the run after stealing a marked traffic police car outside the home of a traffic officer in Limpopo.

Police in Maake outside Tzaneen have launched a massive manhunt for the suspects and the missing white Golf GTI‚ which was prominently marked “Limpopo Traffic Police” and had blue emergency lights.

The hijackers pounced at Lenyenye township just after 9pm on Wednesday.

The traffic officer “stopped the vehicle at the gate of her residence in order to open the gate and was blocked from behind by a silver grey Ford Focus with unknown registration numbers with three occupants inside‚ wearing balaclavas”‚ said police spokesman Lt-Col Moatshe' Ngoepe.

“Two suspects alighted from the car and approached her‚ whereby she ran away leaving the car behind. They took the vehicle and fled.”

WATCH: Brazen thief walks in empty-handed and drives off in a Rolls Royce

One would think there is tight security at luxury car workshops but all it took was a convincing tone and looking the part for a brazen unidentified ...
News
3 years ago