Hundreds in Joburg moved from slum to squalor 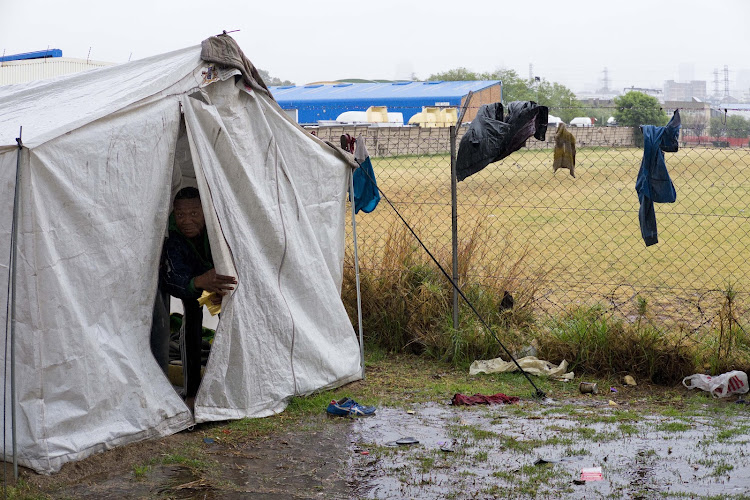 Joseph Crud looks out of his tent, which houses six people, at the Temporary Relocation Accommodation (TRA) at Wembley Stadium, Johannesburg on October 5, 2017.
Image: Greg Roxburgh

Hundreds of people the City of Johannesburg forcibly moved from hijacked buildings are, until better affordable housing is completed, now living in even worse conditions.

The Times visited the land near Wembley Stadium in Turffontein, Johannesburg, where about 600 people are mostly living in disintegrating tents.

Last week the council gave Johannesburg mayor Herman Mashaba the go-ahead to take over hijacked buildings and convert them to low-cost housing units.

He visited one of the buildings on Wednesday but, when asked where its residents would be moved to, Mashaba was vague.

Those evicted from hijacked buildings in the Joburg CBD say the tents they now live in are unsafe and unhygienic.

One of the tent dwellers, Wendy Ndaba, was moved from the Cape York building which caught fire on July 5. Others were evicted from the Shongai and Fattis Mansions buildings.

Resident of hijacked building tells about her terror

One of the residents at a hijacked building in Hillbrow‚ Johannesburg‚ has detailed the fear that all the tenants live in as the landlords threaten ...
News
4 years ago

Ndaba was distraught on Thursday.

She said she had spent several days calling relatives and family to raise R800 to buy food and stoves. But all her food and utensils were stolen on Wednesday night.

"Look at my children. There was no food for them to eat in the morning," Ndaba said.

She declined to have her picture taken, saying: "I don't want my family to see how much I am suffering in Joburg."

It was 11am and all her children were wrapped in blankets to ward off the cold, wet weather. Water had begun making its way into the tent.

Of the nine children, five do not go to school. One is disabled.

Mashaba this week announced plans to step up the clean-up of hijacked buildings, but provided little detail on what temporary housing would be provided for those relocated.

He called for national government to help the city, saying most people living in hijacked buildings were undocumented foreigners, adding "the City of Johannesburg will only take responsibility for South African citizens". 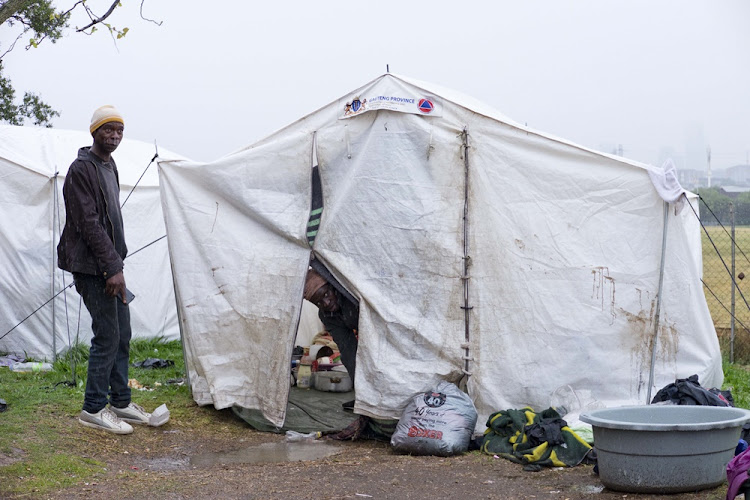 Naboth Madhoro stands outside one of the tents at the Temporary Relocation Accommodation (TRA) at Wembley Stadium, Johannesburg on October 5, 2017.
Image: Greg Roxburgh

Many people living in tents have a different view of Mashaba's inner city housing initiative.

Ndaba wondered whether the hijacked building she lived in was any worse than her current conditions.

"The tent is not safe. Anyone can just open the zip and get inside at any time. Since the winds in July, parts of the tent are torn. It is ridiculously hot in summer and very cold on days like today. How am I supposed to live with children in this?" asked Ndaba, originally from Mahlabathini in KwaZulu-Natal.She worked as a cleaner in the hijacked building to earn a living.

Next to the tents is a brick building resembling an administration block which is occupied by people evicted from the Shongai Mansion on the corner of Jeppe and Small streets in January 2016.

People say when they moved into this building then-mayor Parks Tau took them to Jabulani to show them containers which would be used to house them but this never happened. Those in the brick building have access to water and electricity. The city has identified about 85 hijacked buildings and has asked the private sector to come on board and help refurbish them. Of the 85 buildings, 24 belong to the city.

Mayor of Johannesburg Herman Mashaba has begun a process to take over all hijacked buildings within the city and turn them into affordable-housing ...
Politics
4 years ago

Asked about the fate of those on the Turffontein field, the City of Johannesburg gave an unclear answer.

"The city's social department, with its limited resources, has provided residents with blankets, soup, bread and water, especially following the emergencies giving rise to the need for emergency temporary accommodation. The city continues to provide what available support it can in the context of its limited resources."

However, those on the field said there is currently no support from any government structure.

The council said the "Department of Home Affairs conducted an assessment of people on site. More than 80% were foreigners or without documentation."

The city said it had set aside R291-million to fund the Johannesburg Social Housing Company's purchase of buildings in the inner city.

"We are working hard to ensure our residents without decent housing are allocated a home which allows them and their families to lead dignified lives," Mashaba's office said.