'I was just praying', says Joburg man after surviving storm 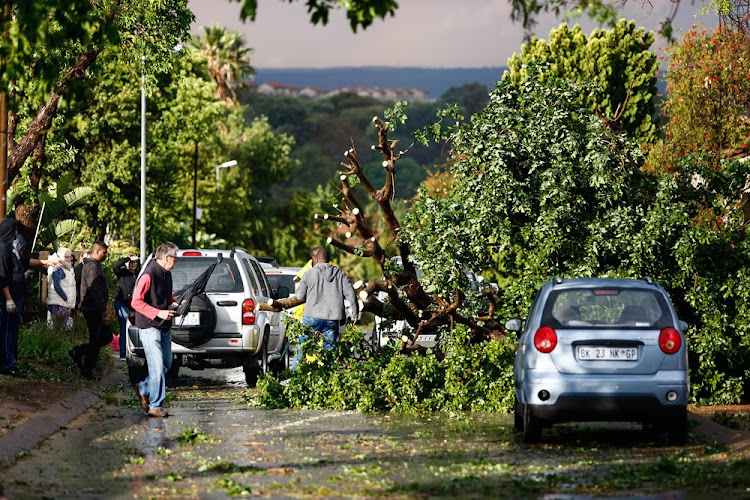 09 October 2017. A severe thunderstorm hit the westrand in Gauteng in the afternoon, causing serious damages to properties. In some areas, traffic was diverted due to fallen trees and flash floods.
Image: Moeletsi Mabe/Sunday Times

A heavy storm swept through Johannesburg on Monday afternoon‚ leaving a trail of destruction.

At least one person died and several others were injured in what was described by eye witnesses as a "tornado" that ripped off the roofs of a primary school‚ a shopping mall and many houses on Johannesburg’s West Rand.

At the same time‚ the Yaldwyn power station in Jet Park near the OR Tambo Airport in Boksburg was on fire‚ causing massive power outages on the East Rand. Twitter posts showed pictures of thick plumes of dark smoke coming from the power station amid the rain. It was not immediately clear what had sparked the blaze but it had plunged parts of Ekurhuleni into darkness‚ stretching from Kempton Park‚ through to Atlasville‚ Plantation and Witfield.

Another 150 homes were said to have been damaged in Putfontein and Etwatwa near Daveyton.

According to Netcare 911‚ one person was killed during the storm in Krugersdorp‚ while ER24 reported two injuries also in Krugersdorp. By Monday evening‚ paramedics were still attending to accident scenes and injuries caused by the storm. Pictures circulated by emergency workers showed the damaged roof of the recently-built Cradlestone shopping near the Walter Sisulu Botanical Gardens on the West Rand.

Daniel Zambezi‚ who lives in the street across from Cradlestone Mall‚ said he got the fright of his life when the storm swept through the area.

He said he thought the world was coming to an end.

"I was just praying‚" said Zambezi‚ whose house’s roof and outer perimeter wall had partially collapsed.

“Fortunately‚ no serious or fatal injuries were found on the scene‚" he said.

Meiring said another nine people were injured in the Delmas and Bapsfontein areas.

“ER24 paramedics first responded to a business off the R50 in Delmas where a building had been damaged. Upon arrival‚ paramedics found that a small building had sustained serious damage‚ injuring the six people inside‚” said Meiring.

A while later‚ paramedics were called to a residence in the Bapsfontein area that had collapsed.

“Upon arrival‚ paramedics found that a man and his two children had sustained minor to serious injuries. The three patients were treated and provided with pain-relief medication before being transported to a nearby hospital for further treatment.”

Other photos showed debris of destroyed shacks scattered in an open veld. Several houses were completely destroyed as their walls collapsed. The mall was evacuated.

Others houses‚ including a block of flats in Honeydew‚ suffered the same fate‚ with pictures from the complex showing roof tiles blown off‚ collapsed carports and an overturned car.

Several vehicles were snapped submerged in floodwaters on the roads.

"Only once we have assessed all the information at hand will we be able to confirm that this was a tornado. For now we refer to it as a storm."

A severe hailstorm wrecked havoc across Gauteng on Monday afternoon.
News
4 years ago