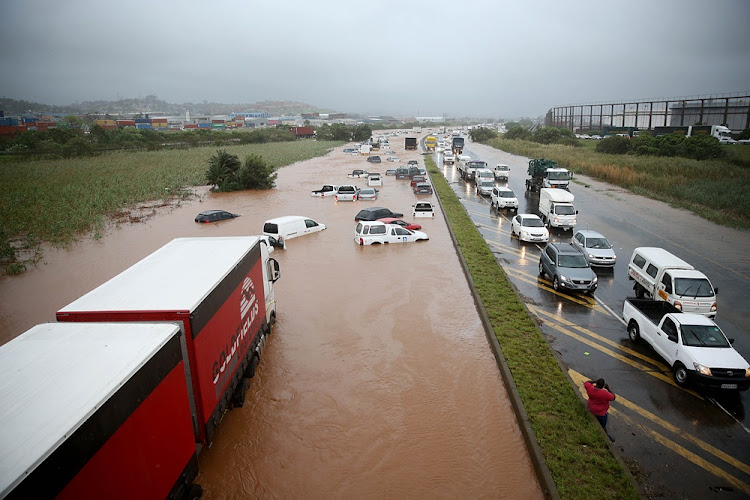 The South African National Roads Agency (SANRAL) has dismissed rumours that the M41 bridge‚ near the Gateway shopping centre north of Durban‚ had collapsed after a storm that lashed KwaZulu-Natal on Tuesday.

Site engineers inspected the interchange and found that no structures had collapsed.

Corné Roux of SANRAL said however a sand embankment between the Mt Edgecombe Interchange and the new Flanders Drive Interchange had collapsed onto the M41‚ closing part of the road.

"The actual road is‚ however‚ intact and will be reopened once debris has been cleared. Motorists are urged to proceed with caution and adhere to speed limits‚" said Roux.

Strong winds that battered the coastline caused a container-laden ship to block the Durban harbour mouth on Tuesday.
News
4 years ago

A flash flood is a rapid flooding of a low-lying area. A massive storm caused this type of dangerous flooding – claiming at least one life – in and ...
News
4 years ago

KwaZulu-Natal has been battered by severe storms that have claimed their first fatality as relentless rain and wind forced some schools to suspend ...
News
4 years ago

Severe storms in KwaZulu-Natal have claimed their first fatality as relentless rain and wind forced some schools to suspend learning.
News
4 years ago

Flooding and driving rain has forced the closure of the N2 freeway near Amanzimtoti as KwaZulu-Natal braces for severe weather on Tuesday.
News
4 years ago