Gauteng mops up after the storm 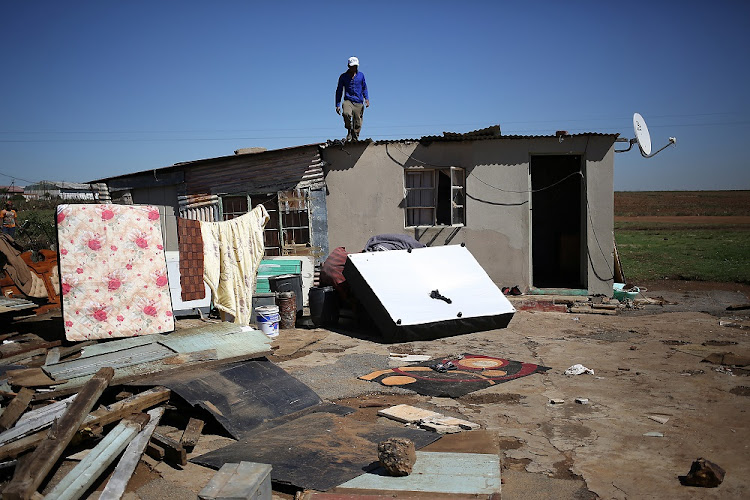 . A clean up underway. Putfontein, Benoni. The informal community behind the Putfontein Police Station was badly affected by a storm that ripped through parts of Johannesburg on 09 October 2017.
Image: ALON SKUY/THE TIMES

Mopping operations are underway in most parts of Gauteng‚ following Monday's storm that caused severe damage in the province.

About 200 households in the Mogale City municipality have been affected and 15 people were injured and transported to various hospitals.

Affected residents are currently being housed and fed at the Magaliesburg Civic Centre while municipalities and NGOs are trying to rebuild their shacks.

Several schools were forced to shut down as they were declared unsafe after their roofs were blown away by the wind.

Pinehaven country estate‚ which has 246 units‚ currently looks like a busy construction site due to Monday's hail. Scores of handymen's and private construction vans are lined up near the gated community to help fix some of the damages left by yesterday's weather.

Inside the complex uprooted trees‚ broken powerline poles and torn-down perimeter walls can be seen in most streets.

"Last year we had bad weather causing damage in some houses‚ but I have never seen anything like this before. Luckily I live in a single-storey house. The wind was on top and it mostly destroyed double-storey apartments‚" said Pinehaven estate infrastructure director Gerrit Bronkhorst.

Bronkhorst said all houses in the estate need to replace their roofs and ceilings. Each unit will cost a minimum of R400 000 to repair.

Gift of the Givers has jumped in to help in Ekurhuleni on the East Rand by supplying food and water.

Ekurhuleni Emergency Management Services (EMS) spokesperson William Ntladi said on Tuesday they were still assessing the damage‚ but at least 205 households had been affected by the storm.

Johannesburg EMS spokesperson Nana Radebe said about 15 households and about 60 people were affected after trees fell on their houses. "Johannesburg is not [hit] that bad apart from Zandspruit and the Ruimsig squatter camp."

Four households in Alexandra were flooded and six households in Orange Farm have been affected. "Fortunately we did not have any fatalities‚" Radebe said.

The rain has moved to KwaZulu Natal.

'We became their umbrella' - heroic teachers protect children from storm

As a severe storm battered a crèche in Putfontein‚ Benoni‚ on the East Rand on Monday‚ causing severe damage to the building‚ two teachers acted as ...
News
4 years ago

All trains services in KwaZulu-Natal have been suspended because of a severe storm that battered Durban on Tuesday‚ leaving thousands of commuters ...
News
4 years ago

The death toll from the storm that lashed KwaZulu-Natal on Tuesday has risen to four.
News
4 years ago

Two schools closed due to damage after Johannesburg storm

Two schools on Johannesburg’s West Rand have been closed in the aftermath of a storm which wreaked havoc across Johannesburg.
News
4 years ago

When the sky falls on your head‚ twice! A mother experienced a double whammy during Monday's hailstorm when a tree fell onto her car and her home's ...
News
4 years ago