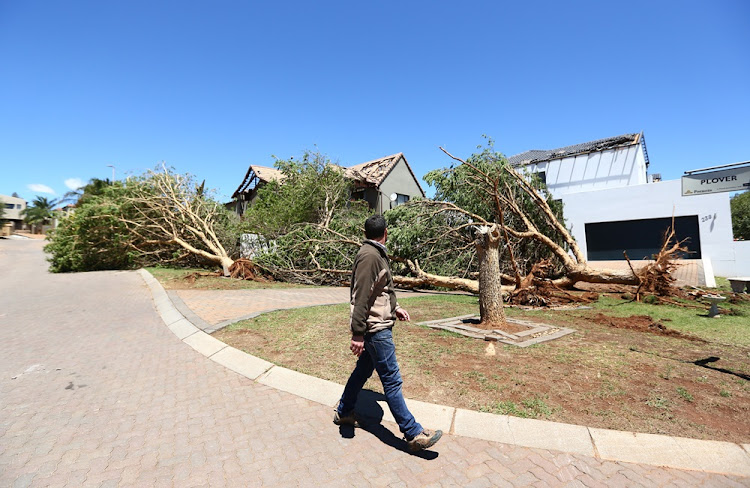 Clinton Zaverdino looks at the trees that fell during the stormy weather on 9 October 2017 and blocked the driveway of a house in Pinehaven estate.
Image: Masi Losi

When the sky falls on your head‚ twice! A mother experienced a double whammy during Monday's hailstorm when a tree fell onto her car and her home's roof tiles were torn off during the "mini tornado" in Krugersdorp west of Johannesburg.

"I thought I was going to die‚" said Pinehaven Country Estate resident Wilmie Smith‚ who found herself trapped inside a car with her child during a hailstorm.

Smith had just dropped her daughter at Laerskool Muldersdrif and was still driving out the school yard with her son when the storm swept through the area.

A tree fell on Smith's car during this incident and completely smashed the back window.

Her daughter and her classmates were overcome with panic as they watched the wind rip off the school's roof.

"I was convinced that I was going to die but I had to remain calm for my children's sake. I am relieved that nobody was hurt."

See the damage to the school here

Hailstones the size of a tennis ball fell during the storm‚ as shared by Aanita Machos Moolman‏.

The traumatic experience lasted less than five minutes but has left behind immense mental and financial damage‚ according to Smith.

"My children struggled to sleep last night. We had to spend the night at a nearby relative's house‚" she said.

While Smith held on to her steering wheel at the school‚ trying to reassure her son‚ more damage was unfolding back home.

High winds tore off several roof tiles and damaged the ceiling of her double storey property.

Pinehaven Country Estate‚ which has 246 units‚ currently looks like a busy construction site due to Monday's hail.

Scores of handyman and private construction vans are lined up near the gated community to help fix some of the damages left by yesterday's weather. 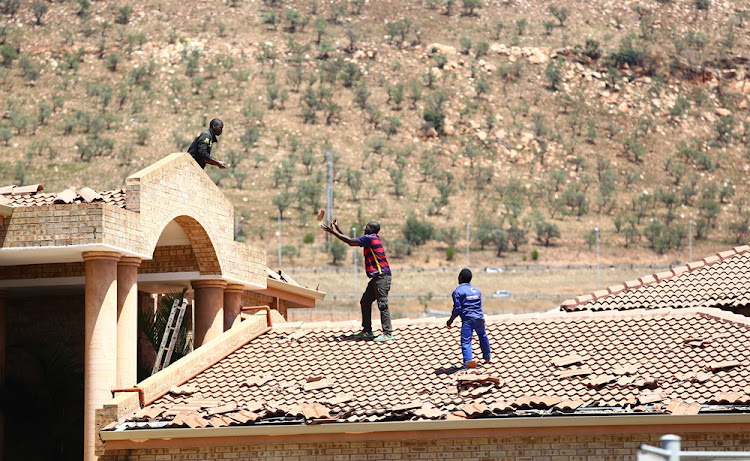 Construction workers fix a roof in Pinehaven Estate that was damaged during the stormy weather on 9 October 2017.
Image: Masi Losi

Inside the complex‚ uprooted trees‚ broken power poles and torn down perimeter walls can be seen in most streets.

"Last year we had bad weather causing damage in some houses but I have never seen anything like this before. Luckily I live in a single storey house. The wind was on top and it mostly destroyed double storey apartments‚" said Pinehaven Estate infrastructure director‚ Gerrit Bronkhorst.

Bronkhorst said all houses in the estate need to replace their roofs and ceilings. Each unit will cost a minimum R400,000 to repair.

"It's sad that we have lost valuable earthly items but they can be replaced‚" said Smith.

Two schools in the area have been have been shut down as they are declared unsafe.

Several road signs and traffic lights around the area have been affected.

No fatalities have been reported in the area.