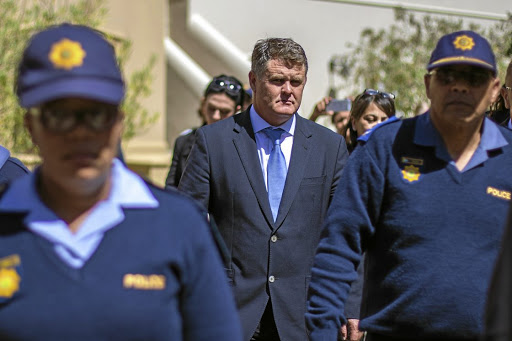 Property mogul Jason Rohde, accused of murdering his wife, Susan, and staging it to look like a suicide, claimed in court on Monday she was suicidal, irrational and obsessive.

His affair was "irrelevant" to the indictment against him, Rohde said.

More than a year after he allegedly killed his wife at the Spier wine estate in Stellenbosch, Rohde's murder trial started in the Cape Town High Court.

Prosecutor Louis van Niekerk said Rohde tampered with evidence, locked the bathroom door where he claims his wife hanged herself, and tried to mislead the police about the identity of the murder suspect.

But his lawyer, Advocate Pete Mihalik, refuted this. In a plea read out to Judge Gayaat Salie-Hlophe, Rohde claims Susan became suicidal after she found out he was having an extramarital affair with Jolene Alterskye, an estate agent in Cape Town.

He said the affair was "irrelevant" to the indictment against him but was something he was not proud of.

He said his marriage "disintegrated" after Susan found out about the affair in 2016 and she became "irrational, obsessive, and angry".

"Susan's conduct vacillated between anger, resentment, desperation and sadness," he said. "I believe, with respect, that her exponential deterioration and her inability to reason or conduct herself rationally ultimately led to her suicide."

He said Susan insisted on attending the Lew Geffen/Sotheby's International Realty annual conference at Spier where the state alleged she was murdered on July 24 2016. Both of them knew Alterskye would attend.

The murder trial of property mogul Jason Rohde started in the Cape Town High Court on Monday‚ more than a year after he allegedly murdered his wife ...
News
4 years ago

Murder accused property mogul Jason Rohde will return to the scene where his wife took her last breath over a year ago.
News
4 years ago

"As the weekend unfolded, the intensity of Susan's anger became more manifest," he said, adding that she said she did not want to live.

Rohde claimed he and Susan got into a "verbal and physical confrontation" on the night before she died.

She had allegedly grabbed him and his arm hit her when he tried to "get 'her to let me go' ". She fell, but he said he "never attacked her".

Van Niekerk said Susan was manually strangled and her death was made to look like suicide.

On Monday, a forensics team and detectives led a delegation from the Cape Town High Court to Spier to inspect the bathroom where Susan's body was found.

Murder accused property mogul Jason Rohde is due to appear for the first time in the high court in Cape Town on Friday for a pre-trial hearing.
News
4 years ago

Multi-millionaire's wife killed 'months after finding out about affair'

February is supposed to be the month of love.
News
4 years ago