How the storm caused havoc in Durban harbour 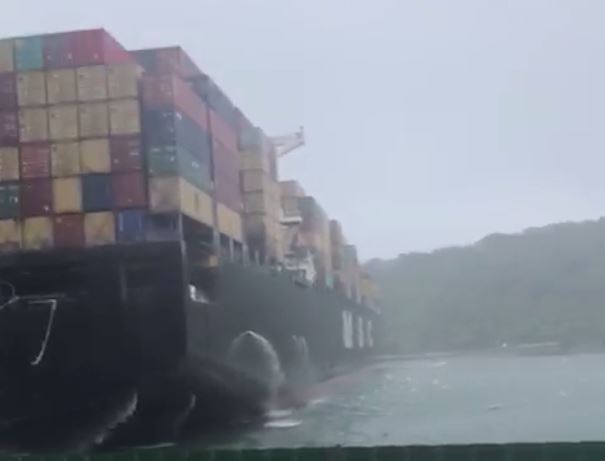 A screenshot of a container-laden ship that was blown into the Durban harbour mouth, blocking it.
Image: Supplied

The storm that hit KwaZulu-Natal wreaked havoc in the Durban port on Tuesday with gale force winds blowing containers and cranes into the water.

The harbour was closed after a container-laden ship‚ the MSC Innes‚ was blown across the harbour mouth. It took a massive joint operation involving five tugs to reberth the ship.

“Samsa principal officer Captain Hopewell Mkhize and port of Durban harbour master Captain Alex Miya convened a joint operations committee which managed the emergency response operations. Five container ships in total were affected. We will continue monitoring weather conditions along the coast and monitor the situation in Durban for the next 48 hours‚” said Tilayi.

An emergency meeting was held to discuss refloating the vessels MSC Innes‚ SM York‚ Bow Triumph and SA Shipyard floating dock with the new harbour tug. The meeting also dealt with vessels MSC Susanna and Maritime Newanda that broke moorings and had to be held by harbour tugs to prevent them also running aground. Tilayi said the MSC Innes took priority as it blocked the port entrance.

"It took five tugs to refloat the 330-metre long container vessel and once refloated‚ she was allocated a berth in the port for damage inspection. "

The vessel Bow Triumph‚ a 183-metre long product tanker which was berthed in Island View‚ broke its moorings and ran aground on the sand bank near the Island View terminal‚ while the SA Shipyards’ floating dock and new tug remained grounded. They are expected to be attended to on Wednesday.

TNPA reported that a straddle carrier which was blown into the water remains unsecured. There are also reports that some cranes were derailed by strong winds. Of concern‚ according to Tilayi‚ were reports of containers believed to have been lost in the water.

KZN storm: Tragedy, displays of bravery and acts of compassion when floods hit

Umlazi pupil Bongumusa Mavundla stood in the driving rain, glued to the spot from where he last saw a 19-month-old baby he tried to save from surging ...
News
4 years ago

Ayanda Mantshongo‚ TNPA corporate affairs executive manager‚ said they had managed to retrieve some containers that had blown into the bay. Vessel movements in the Port of Durban remain suspended until further notice. No severe disruptions have been reported at the port of Richards Bay.

“We are pleased with the overall cooperation from all stakeholders and the swift action to ensure the safety of people and equipment. More importantly is the demonstration of emergency preparedness during this major incident. It is the first time that we have had to attend to this number of casualties simultaneously.

“We are pleased by the reaction of TNPA and their handling of the incident. We are increasingly getting confronted with deteriorating weather patterns and can expect similar incidents in the future‚ given the effects of climate change. It was a saving grace that all this took place within the harbour where all resources are concentrated. It could have been worse if it was over a large open sea area. A full Samsa report will be done once all salvage operations are completed‚” Tilayi said.

Authorities in KwaZulu-Natal will on Wednesday begin mopping up operations after a devastating a "super-cell thunderstorm" hit the province.
News
4 years ago

A 22-year-old mother has given a heart-rending account of how she protected her child as a storm ravaged her home in the Umgababa informal settlement ...
News
4 years ago

When Busisiwe Makhudu and Marriane Mzaza huddled in a corner at the Norah Moriri Créche, in Putfontein, Benoni, on the East Rand, they had no idea ...
News
4 years ago