KZN storm: Tragedy, displays of bravery and acts of compassion when floods hit 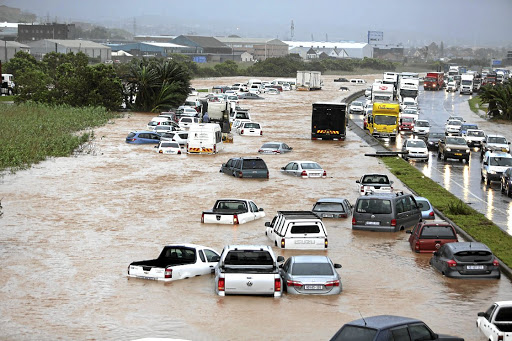 Umlazi pupil Bongumusa Mavundla stood in the driving rain, glued to the spot from where he last saw a 19-month-old baby he tried to save from surging floodwaters.

Tears welled as he recounted the moments when the toddler was swept from an embankment by the frothing brown waters caused by the relentless rain that pelted KwaZulu-Natal from Tuesday morning.

Moments earlier, Mavundla, on his way home, had rushed into the icy water that had washed over Hambakahle Mkhonto Road, in Umlazi, to help to safety a group of children in a créche cut off by the rising flood.

"I went inside and I got the baby and I carried her out of the water," he said.

His attention drawn by the desperate cries of the other children, he placed the baby on an embankment and rushed back into the créche.

A flash flood is a rapid flooding of a low-lying area. A massive storm caused this type of dangerous flooding – claiming at least one life – in and ...
News
4 years ago

"The water just came and took the baby. I was trying to get her to the house. I don't know what is going to happen now," Mavundla said.

The other six children were pulled to safety by Mavundla and their caregiver.

The 19-month-old was one of at least nine victims of the storm that battered the coast of KwaZulu-Natal for more than 12 hours on Tuesday and left a swathe of destruction. It stalled trains and left motorists stranded on flooded highways. Hundreds of households were without electricity.

KZN emergency services spokesman Robert McKenzie said a 12-year-old boy drowned when he was swept away in a stream in Izingolweni, near Port Shepstone.

The office of Public Protector Busisiwe Mkhwebane has been flooded after its roof collapsed following heavy overnight rains in Lynwood‚ Pretoria.
News
4 years ago

One person was electrocuted to death and another injured after a tree collapsed on electricity wires during the violent wind storm which swept ...
News
4 years ago

The winds were strong enough to blow over 12m freight containers.

The storm, which blew in from the South Coast at about 9am on Tuesday and belted the coast as far up as Mozambique, had gale-force winds of 70km/h to 90km/h.

Pictures on social media showed the extent of the destruction: cars washed away, homes flooded and trees crashing onto cars and blocking roads.

The SA Weather Service said the "super-cell thunderstorm" - the most intense form of storm, characterised by a deep rotating up-draft like a tornado, large hailstones, strong winds and flash flooding - moved from Gauteng to KwaZulu-Natal on Monday and to the Eastern Cape on Tuesday.

Weather Service spokesman Hannelee Doubell said the service expected it to blow over within 24 hours.

"We will only know on Wednesday how much rain fell. Our forecasters have described it as a super-cell storm. Satellite pictures show lightning over the sea and it seems to be moving off the coastline."

All trains services in KwaZulu-Natal have been suspended because of a severe storm that battered Durban on Tuesday‚ leaving thousands of commuters ...
News
4 years ago

The death toll from the storm that lashed KwaZulu-Natal on Tuesday has risen to four.
News
4 years ago

In Sarnia, west of Durban, three petrified men clung to each other as they watched the water rapidly rising up to the windows of the bus in which they were trapped on the M7, a municipal highway.

Rescue Care advanced life paramedic Ceron Lennox, assisted by a colleague and an off-duty fireman, swam to the bus to rescue the men.

"A few people had rescued the other passengers before the water level rose. But the three guys refused to budge. They were too scared.

"We used ropes and found a polystyrene board which we used to make little surfboards."

Lennox said the men, none of whom could swim, were panicking.

The seasoned paramedic said this storm was the most severe she had experienced.

In northern KwaZulu-Natal, the department of co-operative governance and traditional affairs reported two deaths in Nquthu local municipality. Other deaths included an eight-year-old girl who was struck by lightning and a 46-year-old man who drowned in a river.

Strong winds that battered the coastline caused a container-laden ship to block the Durban harbour mouth on Tuesday.
News
4 years ago

KwaZulu-Natal has been battered by severe storms that have claimed their first fatality as relentless rain and wind forced some schools to suspend ...
News
4 years ago

Emergency workers tried to extricate a driver whose car was immersed on Isipingo's Old Main Road but were unable to save his life.

"We have not seen anything like this in the city before. There is chaos along the Durban beachfront. The beaches are closed. There is a lot of debris and the promenade is waterlogged. Trees have fallen all over the city. The city's drainage system is not coping," said eThekwini's head of parks, recreation and culture, Thembinkosi Ngcobo.

Transnet National Ports Authority announced late on Tuesday that it had suspended the entry and exit of vessels into Durban.