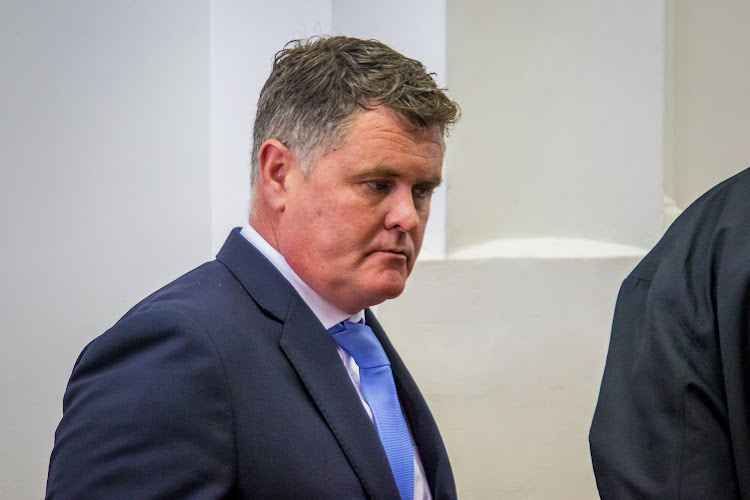 "I was crying and my tears were splashing on her naked breasts."

This was part of the testimony yesterday from Mark Thompson, the state's first witness in its prosecution of murder accused millionaire Jason Rohde.

Thompson testified in the Cape Town High Court about how he tried to resuscitate the naked corpse of Rohde's wife, Susan, in a bathroom at Spier wine estate in Stellenbosch.

The former Anglican priest, who said he had worked with Rohde for seven years, testified he was disturbed by a large bruise on her upper thigh near her pubic area.

He described his desperate attempts to resuscitate Susan for nearly 40 minutes while Rohde sat next to him, pleading in a "mantra-like" fashion.

Thompson was a manager in the Lew Geffen/Sotheby Johannesburg office and attended the real estate company's annual conference at Spier, where police allege Rohde murdered Susan and staged her suicide.

He said a colleague told him at about 8.30am on July 24 last year that there had been an incident in one of the hotel rooms and that someone had committed suicide.

When he got to the room he saw Rohde sitting on the bathroom floor next to Susan's body, Thompson testified.

He described to the court that Susan was lying on the floor with her head pointing away from the door, where a "hair tool's" electrical cable was hanging over a towel hook mounted on the door.

He noticed a knot in the cable which would have been too small for her head to fit through, he said. There was also "a small stool" lying next to her hip and a pool of urine.

"I had read many times that when a person dies they release their bowels and urinate.

"If she hanged herself on the back of the door I would have thought her stool and urine would be at the door," he said.

After questioning by state prosecutor Louis van Niekerk, Thompson was grilled by defence counsel Pete Mihalik SC about why he clearly remembered certain details while others seemed to escape his recollection.

Jason Rohde's 'mistress' set to give evidence for prosecution

The alleged mistress of the multi-millionaire accused of murdering his wife could take the stand in his murder trial alongside a battalion of ...
News
4 years ago

Property mogul Jason Rohde, accused of murdering his wife, Susan, and staging it to look like a suicide, claimed in court on Monday she was suicidal, ...
News
4 years ago

Thompson explained that 15 months had passed since he witnessed the incident and he recalled details which traumatised him or found peculiar.

"In terms of Rohde's reaction, he never said: 'Susan, why did you do this? Susan, I love you, what about our girls?' " said Thompson.

The witness did recall, however, that Rohde attempted to blow into her mouth after he gave up trying to resuscitate her and blood started running from her nose.

It also emerged yesterday that Rohde's alleged mistress could take the stand to testify for the prosecution.

According to the state, Jolene Alterskye - an estate agent who worked for Rohde's firm in Cape Town - said she was in contact with the accused before his wife's body was found.

The murder trial of property mogul Jason Rohde started in the Cape Town High Court on Monday‚ more than a year after he allegedly murdered his wife ...
News
4 years ago

Murder accused property mogul Jason Rohde will return to the scene where his wife took her last breath over a year ago.
News
4 years ago