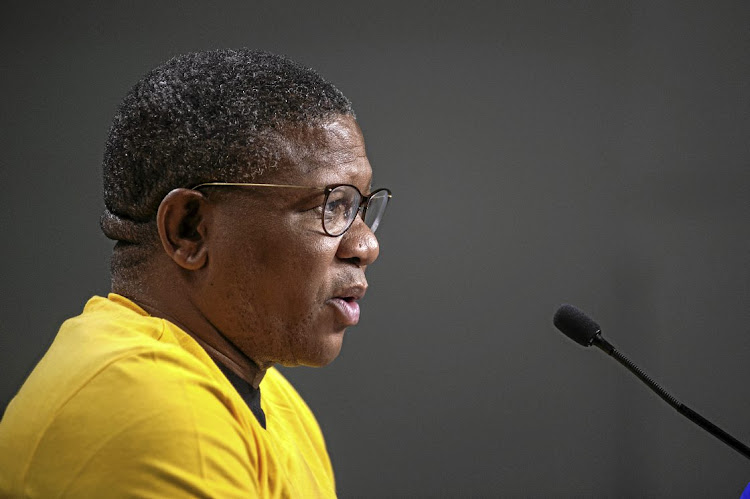 His call came after The Times reported how Mbalula posted images of eight men — arrested in connection with the Marikana killings in Cape Town — on Twitter.

The men were released a day before Mbalula took to social media to boast about the police breakthrough and post an image which identified the men.

They were on their way to the Eastern Cape with the body of a family member on Friday October 6 when they were forced to lie on the ground for three hours‚ waiting for Mbalula to arrive‚ before being taken into custody.

They claimed they were assaulted by officers and that police searched the body and the coffin of the deceased‚ and said they intend to sue the police.

Addressing the media on Friday about police preparations for the festive season‚ Mbalula said the men were not “wrongfully or mistakenly” arrested.

Speaking in Hanover Park‚ Cape Town‚ Mbalula said the deceased was a suspect and the men were linked to him. Therefore they were taken into custody.

2‚270 police guns lost and stolen over past three years

Police minister Fikile Mbalula has detailed how thousands of police firearms were lost or stolen over the past three years.
News
4 years ago

“The police arrested suspects and upon investigating‚ we were not satisfied that … we can proceed and prosecute them in a court of law‚” he said.

Wrongful arrest was when suspects were kept in custody beyond the prescribed time.

Responding to possible legal action against the police due to the incident‚ Mbalula said he would defend officers for doing their job.

“They must continue to harass criminals and bring them back to book‚” he said.

He said the police would keep the men on their radar. “They say the minister interfered. I greeted them. I greet criminals‚ suspects‚ everybody. The police arrest. And I went to the operation.”

Mbalula also slammed DA leader Mmusi Maimane for saying he would join the men and their legal action against police.

“This is a minister focused on being famous than doing his job. It’s outrageous‚ & I will join law action against him for this. #SqueezeMbaks‚” Maimane tweeted in response to The Times’ report.

Said Mbalula: “For a responsible political party leader to say he is going to join suspects to challenge the minister without understanding the substance of what we are dealing with‚ I find it to be very irresponsible and political opportunity of the worst order.”